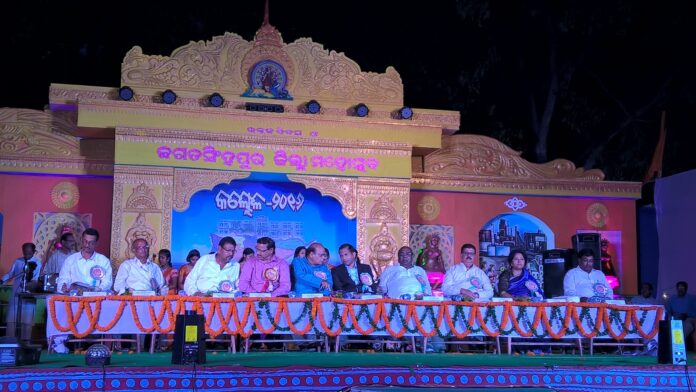 Speaking on the occasion minister Damodar Rout maintained that , Kallolo celebration at district headquarters a right platform to study the development of district. added an ideal place propagating and promoting district’s art and culture among people. political people cutting across party affiliations should come together for the development of Jagatsinghpur the district who had formed 23 years ago by Odisha’s legendary states man late Biju Patnaik in the year 1993, minister suggested.
Chief speaker journalist Arun Kumar Panda reiterated the history of state formation in mid thirties when new Odisha formed in the year 1936 a first state of the country to be established on linguistic basis. Sarala Das’s Odia Mohabharat had played crucial role for identifying our literature during that time; significantly the fifteenth century late poet who had born in Jagatsinghpur so the contribution of Jagatsinghpur district to the state formation is remarkable, Mr Panda informed.
Other attending guests in their speeches claimed for up building modern Jagatsinghpur it needs commitment and consciousness among political parties and citizens.

Chief Guest minister Rout had inaugurated the Mahotsava souvenir ‘Adi Patra’ on the closing day ceremony and few personalities explored in the fields of art, music, culture, sports, literature from Jagatsinghpur district had felicitated during the fest.