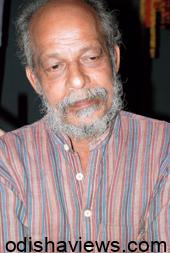 The program was inaugurated by Chief Guest Shri Prabhat Kumar Nanda. A scholar from National School of Drama, Surya Mohanty has been a stalwart of modern creative genre in Odia Theatre. He has been associated with the contemporary heatre group ‘Mukti’ for the last two decades. When asked about his expectations out of the day’s play, he humbly said, “It is my job to perform, and all shall see. If the play is appreciated, I shall be happy; if not, I shall accept it gracefully.” The play was performed in front of a filled auditorium, leaving the audience bedazzled.

20 actors worked together to weave magic onstage in the 95 minute long three play staging. One play ‘Kukura (The Dog)’ tells the story of a trained pet dog’s uprising against the master’s treachery and greed. The many layers of theatrical interpretation brought out the “humanness in the dog” and the “dog-ness in a human”. Celebrated actress Usasi Mishra’s captivating solo play “Saptaha Ra Satadina (Seven days a week)” revolved around the memoirs of a prostitute, whose winding monologues of love, passion and abuse left the audience spellbound.

The last play featured the entire troupe “Udavasha (Illuminations)” exhibited the constant changes in the society and how it is slowly moving towards decadence. It looks back nostalgically at the idealistic past.Mysore based theatre group Rangayana will be staging its Kannada play “What Craziness! Why you behave this way?” on 25th February. It will be directed by eminent theatre personality Prasanna.