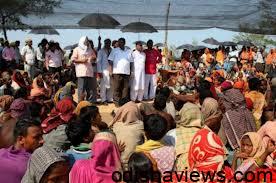 JAGATSINGHPUR Feb 08. The civil administration deferred resumption of betel vein demolition and land acquisition at Govindapur village on the third consecutive day citing stiff opposition by protestors and unfavorable local condition and categorically informed police force would not be withdrawn from the Govindapur with immediate effect.

Meanwhile internationally repute social activist Swami Agnivesh toured the Posco affected villages on Friday afternoon for lending support to the anti Posco brigade and held consultation with villagers and appealed to the Odisha government not to forcible demolish the betel vein and acquire the land for the farmers as it will affect their livelihood and survival.

While speaking in a protest meeting held at Patana Hata inside the trouble torn Dhinkia village Agnivesh described the local villagers including children and women resistance against the proposed Posco project in their area is historic and he could astonish to know that the agitation has started since state government signed a MoU with the South Korean steel major ironically government is not considering the opposition of the villagers till date and progressing to acquire land using police force so it is undemocratic and illegal, he maintained.
Moreover Agnivesh expressed his apprehension why the state government is hell bent on acquiring land for the Posco against the wishes of the people. While the people of the locality have been fighting against the project for the last seven years the government should take the people in to confidence before taking their land, Agnivesh suggested.
On the other hand civil administration again maintained without naming Posco that government is recovering its own land which encroached by the local people since years in Govindapur village and it is known to government whom to this recovered land will be given, said Jagatsinghpur district collector S K Mallick. We have acquired lands about 250 acres in our recent land acquisition drive after dismantling about 55 betel veins and compensation in a tune of Rs 1 Crore had been given to the affected people but did not disclose any details with regard to the resumption of halted land acquisition.

Speaking to this reporter collector Mr Mallick said there is no question of withdrawing police force from the Govindapur area as the local law and order situation is turmoil, we have a duty giving protection to the civilians and their liberty once the police force could withdrawn the local law and order situation would be certainly affected, looking several reasons police force will continue there and police have been asked to maintain utmost restraint, collector expressed.