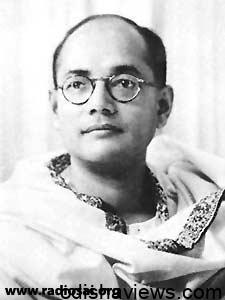 Today is the 115th birth anniversary of Netaji Subhas Chandra Bose. All over country celebrates this day. But many of the people of this country has forgotten him and this day.
Subhas Chandra Bose born on 23 January 1897 also known as Netaji “Respected Leader” was one of the most prominent Indian nationalist leaders who attempted to gain India’s independence from British rule by force during the waning years of World War II with the help of the Axis powers.

Subhas Chandra Bose was born in a Bengali Hindu, Kayastha family on 23 January 1897 in Cuttack, Orissa, then a part of Bengal Presidency, to Janakinath Bose, an advocate and Prabhavati Devi.His parents’ ancestral house was at Kodalia village (near Baruipur; now known as Shubhashgram, South 24 Parganas, West Bengal).He was the ninth child of a total of fourteen siblings.He studied at Stewart School, Cuttack, an Anglo school, until the seventh standard and then shifted to Ravenshaw Collegiate School. After securing the second position in the matriculation examination of Calcutta province in 1911, he got admitted to the Presidency College where he studied briefly. His nationalistic temperament came to light when he was expelled for assaulting Professor Oaten for the latter’s anti-India comments. He later joined Scottish Church College under University of Calcutta and passed his B.A. in 1918 in philosophy and Subhas Chandra Bose left India in 1919 for Great Britain with a promise to his father that he would appear in the Indian Civil Services Examination (ICS).

He went to study in Fitzwilliam College, Cambridge, and matriculated on 19 November 1919. He came fourth in the ICS examination and was selected but he did not want to work under an alien government which would mean serving the British. He resigned from the civil service job and returned to India. He started the newspaper Swaraj and took charge of publicity for the Bengal Provincial Congress Committee.His mentor was Chittaranjan Das who was a spokesman for aggressive nationalism in Bengal. In the year 1923, Bose was elected the President of All India Youth Congress and also the Secretary of Bengal State Congress. He was also editor of the newspaper “Forward”, founded by Chittaranjan Das. Bose worked as the CEO of the Calcutta Municipal Corporation for Das when the latter was elected mayor of Calcutta in 1924.In a roundup of nationalists in 1925, Bose was arrested and sent to prison in Mandalay, where he contracted tuberculosis.