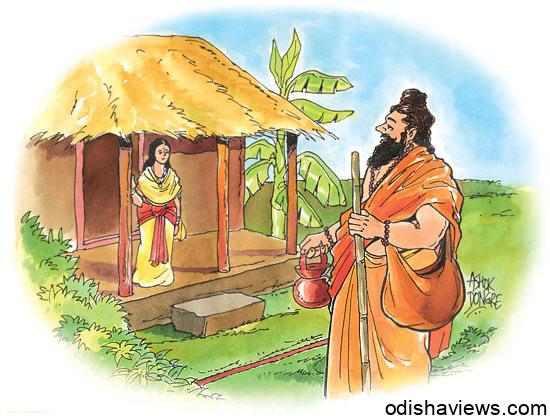 When we refer to Buddhism and linked to Asoka and put his vision to Nationalistic approach for modern India then, I think there is no reason to be linked with a King to religion for Nationalistic and Patriotic approach. Nationalism having different phenomena and it is beyond religion. It is to be preached according to preamble of constitution not by any body’s personal belief. Religious mask not only warned by Matshya Purana, it also reflect in every age. Ramayana which is specially most influenced to this land is a eye opener and warning signal for future of India when Seeta kidnapped by Raavana with a religious mask. To analyse these fact we have to analyse Asokan dhamma also in this context.

Absence of Basics Enchanting of Lord Buddha:-
The basic fundamental to become a Buddhistis to take refuge in Buddha, Dhamma ,Sangha and to take refuge recite a Pali formula Buddham saranam gacchami:

I undertake the precept to refrain from intoxicating drinks and drugs which lead to carelessness.
Out of five percepts no. 2 , 3 and 5 not conformed from any of his Edicts. Against 1st percepts he is acting just opposite to it. If 8th year of so called Killing of Kalinga war giving his heart transformation then in his Girnar Rock Edict No.1 how he engaged in Killing of three animal for eating in royal Kitchen( Two Peacocks and a Deer)[Peacock related to Mayuryan symbol and Deer to Buddhism]/////Review- If the person is not a Yavana King then not enchanting Buddham Saranna Gachhami and Killing of animals for meat even after taking Buddhism is not only a outward show but justify futuristic aspect warned by Matsya Purana.

In this way if we recall a Odia Bhajana for Lord Jagannath cult at the time of Buddha incarnation ( Ghora Bane Mruguniku padithila kasana Chakra pesi Nakranasi uddharile aapana, aahe nila saila pravala matta barana…)it has its clear vision of a rescuer. If the Devanampiya ,who is the writer of XIIIth Edict is not a Yavana then an Indian after taking oath become a Arhat or Sanghiyana he never be do such act. Edict in Junagadh -Gujrat is not only a eye opener but the Edict should be studied carefully not emotionally. Denying certain great facts regarding the theory of Nationalisim on the shadow of any particular religion is a great danger to National interest and which are more essential than any religion. Religion does much more damage than others to the Indian society.
In No.4 Regarding precept to refrain from incorrect speech, –“threatening to Forest Tribal people for not doing harm otherwise they will be killed” is not only open the mask of a false saint but also a Kings desire for acquiring more land in the religious mask is clear. Which Matsya Purana rightly observed and Lord Jagannath in his Kali Cult taking Tribal cult is also a hint to awaken.

The Buddhist Symbol is Basically of Eight Wheeled
Mahayana schools classify Buddhist teachings in turns of a sequential scheme of development. These phases are called “turnings” of the Dharmacakra (Sanskrit: dharmacakra-pravartana).All Buddhists agree that the original turning of the wheel occurred when the Buddha taught the five ascetics who became his first disciples at the Deer Park in Sarnath. In memory of this, the Dharmacakra is sometimes represented with a deer (not Lion) on each side (Above Photo). In Mahayana Buddhism, it is said the Buddha turned the dharma wheel three times. These three turnings represent three significant events in Buddhist history. The dharma wheel, usually depicted as a wheel with eight spokes for the Eightfold Path, is a symbol of Buddhism and of the Buddha dharma. Turning the dharma wheel, or setting it in motion, is a poetic way to describe the Buddha’s teaching of the dharma. Eight wheeled Dharmachakra is well accepted in all over world.

Most of the Buddhist using 8 wheeled chakra which denote the standards established by the Buddha, which are eight in number: Any behavior that —

If the Dharmachakra of Asoka is from Buddhism then, when Buddha achieved nirvana (Enlightenment) at Gaya, he came to Sarnath on the outskirts of Varanasi. There He found his five disciples (panch vargiya Bhikshu) Ashwajeet, Mahanaam, Kaundinya, Bhadrak and Kashyap, who had earlier abandoned him. He preached his first sermon to them, thereby promulgating the Dharmachakra. In this way if it was of 5 spokes then we can justify it.

Asoka and his Symbol as national Symbol

Intensity of National symbols is to unite people by creating visual, verbal, or iconic representations of the national people and a motivating force with their values, goals, or history. A national symbol is a symbol of any entity considering itself and manifesting itself to the world as a national community – namely sovereign states, but also nations and countries in a state of colonial or other dependence, (con)federal integration, or even an ethnocultural community considered a ‘nationality’ despite the absence of political autonomy. These symbols are often rallied around as part of celebrations of patriotism or aspiring nationalism (such as independence, autonomy or separation movements) and are designed to be inclusive and representative of all the peoples of the national community.

Asoka Chakra as Bravery Award to Defence Personnel for what

In this respect giving Asoka Chakra as bravery award, when historian sound Asoka has only one war with Kalinga in his life time, then the political intention is very clear, Divide and Rule. A defence personnel is to safe guard the country or indulge in the internal political disturbances through this (Asoka Chakra) is a great question mark. Then the question arise who is brave? The king who indulge in internal disturbances and love the invaders and sell this land to the Invaders for rule (Ref-Junagadh Inscription of Rudradamana), or who teach the Invaders a lesson what is India?

Wheel in Jainism: The wheel of dharma (Chakra) with 24 spokes represents the religion preached by the 24 Tirthankars consisting of nonviolence (Ahimsä), compassion, Anekäntvaad, Aparigraha and other virtues, and equality of all the souls.

If we analyse the two sect of 24 spokes justification it looks Jainism has the great theme of 24 spokes but Buddhism has great theme of 8 spokes. All the symbols of Indian religion is on the lower side of the Asoka Stambha ( Bull-Hinduism, Elephant-Buddhism, 24 Spokes- Jainism) therefore it may be treated to justifying ruling over them not have any religious phenomena in it.

The Asoka Stambha extracted from the pillar of Saranath has described a warning to the monks and nuns those who are engaged in division in Samgha . This place is having no Buddhist religious place or Buddhist temple . The third and fourth line is most debatable in translation which shows remarks of Jainism not Buddhism. Certain Scholars remarks are given below:-

Dr. D.R. Bhandarkar-[…The Samgha may not be divided by anyone. But whosoever breaks the Samgha, be it monk or nun shall be clad in white raiment, and compelled to live in what is not residence..]

V.A.Smith-Whosoever monk or nun shall break the unity of the Church (Samgha), shall be compelled to wear white garment and to dwell in a place not reserved for the clergy]

Dr. Bloch-[A monk or nun who causes schism in the Samgha, let them put on white cloth (Instead of ordinary yellow robe ) and take their living in some other place]

Almost all the scholars translate it in the same manner for punishment and to wear white cloths. It is a division of Jain sect ( Swetambar and Digambar). White clothes are wearing by Swetambar sect and Digambars are became Naked sadhus. Here tone of Buddhism religiousness or a version of saint is missing but political religion is occupying its seat for ruling on religious ground.

At last it is to say that the Asokan vision implanted in different field in Indian thoughts having no Nationalistic or Patriotic approach. It is just to appease the colonial Britisher thoughts. Their implanted colonial history just followed word by word and appease them as their great admirer and saluting them even after they have left India as a ruler . Britisher’s vision is still saluted by the slaves for the masters. Truth is truth, the false masters fled away in Jackels fear and their Indian counterpart surrender and get Big pardon (Mahakhyama) and remain a history of glory, saluted for the thousand years for bravery and open hearted pardon for the wrong deed. Dharma is also the rescuer of false Dhamma. Yada Yada hi Dharmasya, Glanir Bhavati Bharata…………