A festival of civilization ; We made it, the world celebrate it.

[dropcap]70%[/dropcap] of the world surrounded by water and in India approximately 70% is sea coast but the celebration of voyage only celebrated in Odisha the ancient maritime civilization name of Kalinga. Western scholars never thought of any celebration of voyage why celebrated here simultaneously with other South East Asian countries on the same lunar month and date. The year 2012 celebration of the Boat festival called ‘Danga Bhasa’ is to be celebrated on 28th November simultaneously in Thailand and Odisha. Here we called it ‘Danga Bhasa’ but there they called ‘Loy Krathong’. 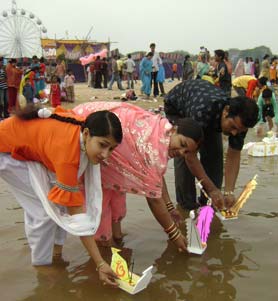 Western scholars have underestimated India’s achievement with regard to commerce, ship-building and navigation, and sea travel. These scholars believed in the Doctrine of Christian Discovery – According to which only Christians could be regarded as discoverers. Hence, the claim that Columbus “discovered” America , or that Vasco da Gama “discovered” India). The people already living on the land did not matter. This colonist bias against Indian culture is fully matched by the Indian ‘Marxist historian’ bias against Hindu culture simultaneously Kalingan history with voyage and knowledge.

Kalinga as a maritime power in ancient times and Kalidas in his Ragbuvamsa referred to the King of Kalinga as “The Lord of the Sea”(Mahodadhipati). The Aryamanjusrimulakalpa, a text of Mahayana Buddhism, refers to “All islands in the Kalinga Sea” (Kalingaodresu). It seems from these accounts that the eastern sea or the modem Bay of Bengal[Mahodadhi] was known in the past as the “Kalinga Sea”being dominated by the ships of Kalinga. A portion of Java island was then known as Ho-ling which is interpreted as a variant of the word ‘Kalinga’. Similarly, the people of Tri-Kalinga who colonized in Burma, are known as Talaing. Bali and Java were important centers for the spread of Indian culture lead by Kalinga in the front .

1. Agarthchides of Cnidus, Ptolemaic Dynasty, President of the Alexandrain Library, who is mentioned with respect by Strabo, Pliny and Diodorus, and who lived upwards of 300 years before the time of Periplus, noticed the active commercial intercourse kept up between Yemen and Pattala – a seaport in Western India. Pattala in Sanskrit means a “commercial town” which circumstance if it is true, says Prof. Heeran, “would prove the extreme antiquity of the navigation carried on by the Indus. Agatharchides saw large ships coming from the Indus and Pattala.

The importance of trade was highly appreciated by the people of Kalinga – a kingdom on the Eastern seaboard of India. Inscriptions “speak of navigation and ship commerce as forming part of the education of the princes of Kalinga.” 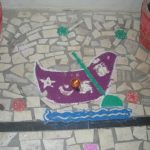 J. Takakusu writes: “That there was a communication or trade between India and China from 400 A.D. down to 800 A.D. is a proven fact. Not to speak of any doubtful records we read in the Chinese and Japanese books, Buddhist or otherwise, of Indian merchant ships appearing in the China Sea; we know definitely that Fahien (399-415 A.D) returned to China via Java by an Kalingan boat at further in the Tang dynasty an eyewitness tells us that there were in 750 A.D. many Brahmin ships in the Canton River.”
(source: Journal of Royal Asiatic Society, Great Britain and Ireland. October 1905 p. 872).

2. The Hindus had already in use a magnetic compass known as Matsya Yantra for determining direction. The work “Merchants Treasure” written at Cairo by Baylak al Kiljaki mentions the magnetic needle as being in use in the Indian Ocean. The route that Fa-hien, the celebrated Chinese monk, took to return home after his stay in India (412-413) is fully described by him. Leaving Tramralipti, the Orissa port, he took fourteen days to reach Sri Lanka. From there he embarked for Java and called at Nicobars (Nakka-varam), the island of the naked. From Nicobar the ship passed through the Straits of Malacca into the Pacific. Oceanic travel was therefore well advanced in the fifth century and Indian mariners not merely crossed the Bay of Bengal at its widest point, but sailed far out into the Pacific. (source: India and the Indian Ocean – K. M. Panikkar)
3. According to the Divyavadana the desire to amass wealth without making a sea voyage is like an effort to fill a pitcher with a few drops.
4. The Jaina texts like the Gyatadharma Avasyaka-chou-ko-ta’an (1122 A.D.) mentions large ships from Kalinga that carried several hundred men and smaller ones which carried hundred or more men.

5. The Sri Vijaya Kings maintained a powerful navy which swept the sea of pirates and corsairs. Their naval power, well attested by their continuous raids on the coasts of Champa and Annam, is recorded both in local inscriptions and in Chinese annals, (e.g Po Nagar Stelae inscription of King Satya Varman 784 A.D. and in Yang Tikuh inscription of Indra Varman I, dated 787). With the Straits of Malacca firmly under their control and with their authority extending over the far flung group of islands, the Sri Vijaya Kings were in a position to enforce their rule over the Indian waves. Further, they were also closely connected with the Indian Kingdoms of the Eastern side of the Bay of Bengal (Mahodadhi) especially with the Kalinga monarchs of Orissa.

6. “…an Indian naval pilot, named Kanha, was hired by Vasco da Gama to take him to India. Contrary to European portrayals that Indians knew only coastal navigation, deep-sea shipping had existed in India. Indian ships had been sailing to islands such as the Andamans, Lakshdweep and Maldives, around 2,000 years ago. Kautiliya’s shastras describe the times that are good and bad for seafaring. In the medieval period, Arab sailors purchased their boats in India. The Portuguese also continued to get their boats from India, and not from Europe. Shipbuilding and exporting was a major Indian industry, until the British banned it. There is extensive archival material on the Indian Ocean trade in Greek, Roman, and Southeast Asian sources.”

7. The Kalinga king Mahameghabahana Kharavela in his famous Golden Rock Inscription (Hathi Gumpha Inscription) not only depict the symbol of voyage in the starting of the edict but a proper naval Warfare is written in the edict. It clearly shows how the Navigation technique developed before 2000 years back with voyage.
Voyage civilization and Kalingan culture

Prince Norodom Sihanouk of Cambodia Express Praise his Gratitude towards the ancestors—It is frequently said that Angkor was ‘discovered’ by the Europeans but this is patently nonsense and simply reflects a Eurocentric view. Norodom Sihanouk of Cambodia recalled the close cultural ties that have existed for two thousand years between Kalinga (India) and Cambodia. He said: “When we refer to 2000 year old ties which unite us with India, it is not at all a hyperbole. In fact, it was about 2000 years ago that the first navigators, Indian merchants, and Brahmins brought to our ancestors their gods, their techniques, their organization. Briefly India was for us what Greece was for the Latin Occident.”

To explore the ancient tie with ancestors home an Indonesian scholar, Dr. I.G.P. Phalgunadi, visiting Orissa, was very pleasantly surprised at many instances of similarity between the culture and lifestyles of the two people which includes their graceful dance forms, art and handicrafts, temples, monuments and distinctive style of architecture, tie and dye, weaving technique and elegant textile designs, specialties of their cuisine, and the tranquil spread of their coconut fringed golden beaches.****(Continued)***

Eurocentric view and western scholars underestimation of Indian culture is not only defaming our own entity but our half Britisher communist mentality historian giving them full support to counter all Indianness and promoting psudo Globalisation of truth of knowledge. But the truth is truth, the fire cannot burn Seeta and Gold , they come out with freshness when they put into it . In the same way after all ups and downs still we preserve the past . The ‘Danga Bhasa’ in Odisha’s celebration of culture for maritime past showing the world , that we made it, and the world celebrate it.