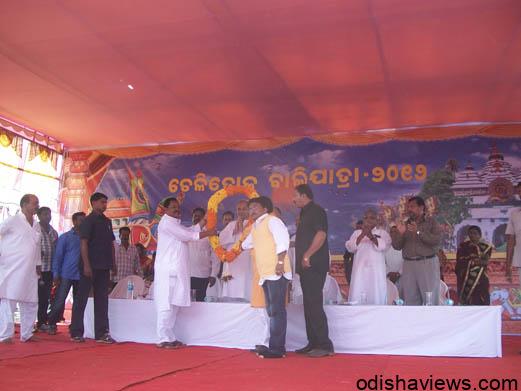 JAGATSINGHPUR Nov 28. In the backdrop of the roaring sea and the glazing sands under halogen lights the Kalinga Baliyatra-2012 fair got off to a colourful start at Biju Maidan in Paradeep port town on Tuesday, including Chelitol Bali Yatra at Tirtol was kicked off while state chief minister Naveen Pattnaik inaugurated both the week long fest’s and chief minister participated traditional Boitabandan Utsav organized by Paradeep Port trust at port harbor on Wednesday.

It is evident from the fact that Paradeep maintains a rich traditional back ground of trades and enhanced status of major port of the country in mid nineties the legendary Odisha’s former chief minister late Biju Patnaik was started Kalinga Bali Yatra at Paradeep in the year 1992 since then the celebration is under progress , however another Bali Yatra fair naming Chelitola Bali Yatra was begun from year 2002 at Tirtol recalling the glorious maritime tradition traditions of the area, moreover both the Bali Yatra ‘s have received official affiliation and being organized by district council of culture in collaboration with local cultural fondly people and organizers.

Though the tradition of ancient Odisha culture speaks that Boitabandan is a celebration to mark the age old tradition of sea voyage by the Sadhab’s race of Odisha sailed for trade to eastern islands as Ceylon, Java, Sumatra and Bali. In the back drop of roaring sea and river mouths the female members of Odisha rapture chants of Aa Ka Ma Vai recite benedictory rites and later the sea traders start their yearly voyage to distant islands. Even in present no Sadhab comes for sea voyage in recent times but this traditional celebration still exist in Odisha on the full moon day of holy month Kartika people used to float tiny boats either of banana peels or paper with lighted lamps inside to mark the occasion. Recalling the practice Paradeep port trust every year hosts Boitabandan Utsav inside its port harbor and this year chief minster participated in the celebration and performed the rituals on Wednesday.

Speaking on the Bali Yatra inauguration and Boitabandan Utsava in different places chief minister Naveen Patnaik reiterated the rich culture and heritage of Odisha transforming to other countries and recalled the glorious maritime tradition of ancient Odisha. Biju Babu was instrumental for establishing Paradeep port in the year mid sixties and now the port has accorded as major port of the country and the region is going to be a major industrial hub of India as many as Rs 1 Lakh Crore has proposed to invest in several projects would be certainly benefit prosperity and economical growth of state including development of Jagatsinghpur district, CM added.

According to organizer sources informed Kalinga Bali Yatra will run for seven days and Chelitola Bali Yatra will conclude on 2 December, the district council of culture has planned in a big way to stage cultural nights on all seven days of the fair, several cultural troupes from district and outside district will perform entertainment programmes in different days, the fest is an ideal platform propagating and promoting district’s art and culture to show case district development, informed Surjit Das, ADM Paradeep.