Paradeep oil refinery all set to be commissioned in September 2013 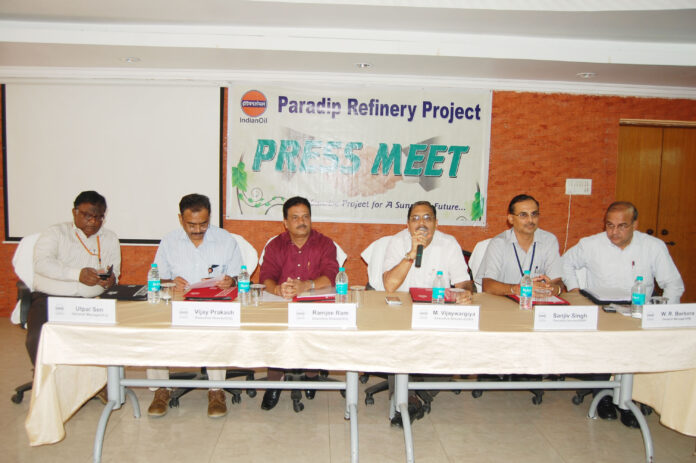 Paradeep- The much awaited Indian Oil Paradip Refinery Project (PRP) will be commissioned at Paradeep in September 2014; the Rs 29,777 Crore project has received 93 percent completion, informed Executive Director [ED] of the project Mr M Vijaywargiya in a media conference held in project site office at Paradeep.
Paradip Refinery is to be the most modern coastal export oriented processing unit of IndianOil with a future petrochemicals unit spread over 3344.65 acres. Paradip Refinery is IndianOil’s largest investment in a single project. The designed capacity of 15 Million Metric Tonnes will ensure that it will contribute significantly towards the growth of Indian Oil in, Odisha. ED told to media persons.

Stating project profile executive director informed that it is the first Zero-Residue refinery of the Country. The processing scheme has combinations of Hydrocracker Unit and Delayed Coker Unit to maximize distillate yield like Jet fuel/kerosene and Diesel. The major products will be Liquified Petroleum Gas, Naptha, Motor Spirit, Diesel and Sulphur. Latest State-of-Art Global process technologies are being utilized. ED informed.
Very large crude containers will offload crude directly into the refinery tanks through the Single Point Mooring facility installed 23 kms inside sea connected to a pipeline link. Evacuation of products will be through pipelines spread from Paradip Port, This refinery will primarily handle high sulphur, high residue international crudes to ensure profitability and energy security of the Nation. The immediate potential growth of ancillary and auxillary industries around the Refinery will serve as an economic incentive for industrial development of Jagatsinghpur district, he claimed..

Paradip Refinery Project has achieved 93 percent progress. Paradip Refinery has an approved budget of Rs 29,777 crores, More than 500 engineers and officers of IndianOil under the sterling leadership M. Vijaywargiya, Executive Director (Projects) are toiling round the clock at the project site. Commissioning of Paradip Refinery is scheduled in phases from September 2013, ED anticipated.
Environmental protection is of prime importance to Indian Oil. More than 600 acres around the refinery has been developed as a greenbelt with five lakh trees have been planted, efficient dispersion of flue gasses from furnaces and boilers, waste water treatment facilities, Air Quality monitoring system have been adopted for ensuring a completely environment protection unit and all units and facilities are under the expert consultancy and management of world’s leading technical giants, ED divulged.
Executive Director further informed that due to various problems such as labour unrest, local law and order problems the project has been delayed than its stipulated time of commissioning, however he refuted the charges alleging that substandard materials including saline sands were used in the project construction.
Revealing CSR activities ED described IOCL has committed providing support services to the people of Odisha in various sectors as providing health care and medical equipments, free medicines to BPL patients , street lights, drinking water supply, development of roads, promotion of Art and culture and most significant responsibility has taken adoption of Sun Temple Konark in collaboration with Archaeological survey of India and contributing funds to National Cultural Fund , about Rs 1.74 Crore has estimated to be spent from current fiscal’s CSR budget , ED said.