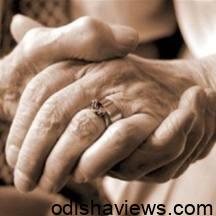 He has been staying with one of his sons who is a professor and they do not bother to take care of the old man, even never bother to talk with him, ask for food – just treat him as a waste material that does not have any value. He has been treated this way since couple of years (after his wife expired) and trying to adjust with the situation, however on that day the situation worsen and unbearable for him. Since Saturday night he has not taken any food as his son and daughter were busy for a Swami (Baba). Due to his old age (when asked about his age, he told 85 years), he can’t go to ATM and draw money to buy some food. That was not the first time, many a times he suffered like this.

After long conversation, I asked what he wants to do and can I anyway help him. Initially, he was very hesitant and not willing to ask for any help/support (Seeing his age and condition, I could not leave him on that state). Finally he asked, if he can get a cup of tea (without sugar), which I arranged for him from nearby shop. And asked him to have some snacks – he agreed in one condition, he will pay the amount and I need to help him to get the money from his SBI Account. After tea and snacks – found him little bit relaxed and started talking normal way. Now, it’s time for me to discuss about his plan and what he wants to do – so I asked him. First thing, he wants some money (which I need to withdraw from his ATM), second he wants to go to one of the old age home (which he knows and one of his old friend also staying there). I had take a move from there and asked him to wait for 10 min, I need to bring my car.