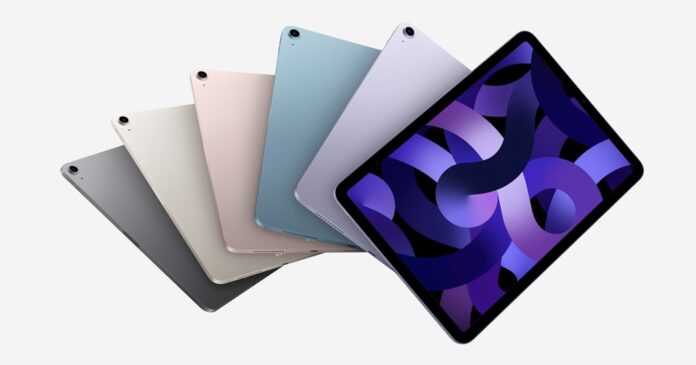 Apple has unveiled the new iPad Air 2022 with an M1 chip with an 8-core CPU and 8-core GPU, the same one used in the iPad Pro models launched last year. The iPad Air is available in 64GB and 256GB configurations.

The Wi-Fi models of iPad Air are available with a starting price of Rs 54900 and Wi-Fi + Cellular models start at Rs 68900. iPad Air comes with Touch ID support that is integrated into the power/ standby button.

The device comes with a 12MP Wide rear camera along with an f/1.8 lens that is identical to what was available on the last model. The camera supports features including Autofocus with Focus Pixels, Panorama (up to 63-megapixel), Smart HDR 3, Photo geotagging, Auto image stabilization, and Burst mode. Further, it has 4K video recording support at 24, 25, 30, and 60fps frame rates.

“Whether it’s a college student taking elaborate notes, a content creator working on their latest project, or a gamer playing graphics-intensive titles, users love iPad Air for its amazing performance and versatility in such a portable design,” Greg Joswiak, Apple’s senior vice president of Worldwide Marketing said in a statement.

It features a 10.9-inch LED-backlit Liquid Retina display with a 2360×1640 pixels resolution. The display comes with a peak brightness of up to 500 nits and carries P3 wide-color gamut as well as True Tone white balance support.