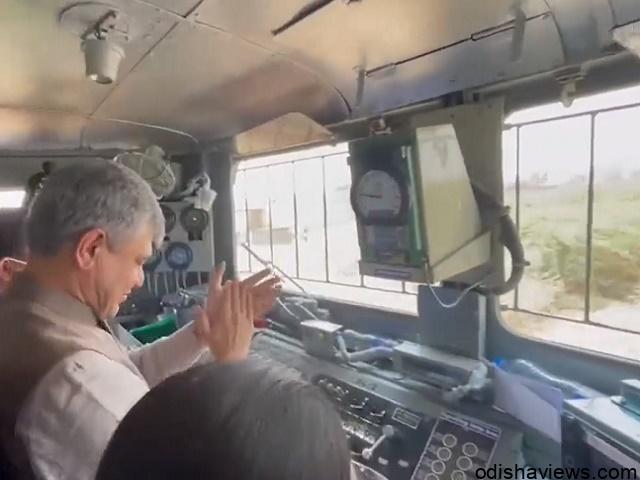 The test was done on Gullaguda-Chitgidda Railway stations on the Lingampalli-Vikarabad section in the Secunderabad Division of South Central Railway. Shri V.K.Tripathi, Chairman & CEO, Railway Board, and other senior officials were also present on this occasion.

In the trial, a head-on collision situation was created by moving both the locomotives towards each other. The ‘Kavach’ system initiated the automatic braking system and halted the locomotives 380 meters apart. The system was also tested with a red signal and it was successful in the automatic application of brakes preventing it from crossing the red signal.

The crew did not manually touch the sound and braking system during the trial. The speed restriction of 30 Kmph was tested when the locomotive was run on loop line. ‘Kavach’ automatically reduced the speed to 30 Kmph from 60 Kmph as the locomotive entered the loop line.

The KAVACH is an indigenously developed ATP system by the Research Design and Standards Organisation (RDSO) in collaboration with Indian industry and trials facilitated by South Central Railway to achieve the corporate objective of safety in train operations across Indian Railways. It is a state-of-the-art electronic system of Safety Integrity Level – 4 standards.

KAVACH is meant to provide protection by preventing trains to pass the signal at Danger (Red) and avoid collisions. It activates the train braking system automatically if the driver fails to control the train as per the speed restrictions. In addition, it prevents collision between two Locomotives equipped with a functional KAVACH system.

‘Kavach’ is one of the cheapest, Safety Integrity Level 4 (SIL-4) certified technologies with the probability of an error being 1 in 10,000. Also, it opens avenues of export of this indigenous technology for Railways.