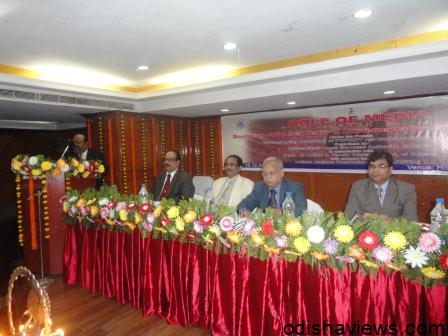 By  Kahnu Nanda  : JAGATSINGHPUR Dec 15. The pre natal sex determination and pre conception sex selection through up to date diagnostic techniques have created gender discrimination in society, the census 2011 data indicates that the child sex ratio in Odisha has come all time low of 934 girls for 1000 boys, districts like Nayagarh, Dhenkanal, Anugul and Ganjam the ratio of girl child alarmingly has got down less than 900 against 1000 boys, the state is turning dearth of girl child in coming future, so media adjudges a way creating awareness among the general public to curb the declining child sex imbalance, expressed speakers addressing a workshop on child sex ratio and implementation of the pre conception and prenatal diagnostic Act 1994 [PCPNDT] held in Cuttack on Saturday.

Attending the work shop justice M M Das senior judge Odisha high court and chairman high court legal services committee said law alone cannot solve the crisis on sex ratio imbalance, it requires change of hereditary mind set among people towards girl child in society, so media is a tool in which way we can educate people, the power of media in our lives is immense , it helps in making us to form our opinions on major issues of social importance, it plays a pivotal role in creating public awareness against social evil and other unhealthy practices in the society, so declining child sex ratio issue should be highlighted through media, hon’ble judge suggested.

Another high court judge and executive chairman Odisha state legal services authority [OSLSA] justice P K Mohanty described media a critical resource in building a healthy and progressive society , media has a huge responsibility of conveying the truth and relevant information to the common man, besides media plays an important role in increasing public awareness and formation of views and attitudes towards certain issues , in this regard the growing gender discrimination and elimination of female foetus in recent times need to be highly publicized in different forms of media, judge advised.

The technical session of the work shop was conducted by Mr B C Rath member secretary OSLSA who had discussed the legal aspects of the PCPNDT Act and its implementation and functions of different stakeholders under the Act, moreover he divulged about 31 cases have been registered in state violating PCPNDT Act and 3 Medical practitioners have been found guilty under legal prosecution and Medical council of India has been asked cancelling professional license of these three doctors, Mr Rath added. Dr Raghunath Behura programme manager directorate of family welfare highlighted the social dimensions of gender biased sex selection and said media often play a varied and vital role in society generating public opinion, so the crisis of declining sex ration should be highly publicized, he said.

Mrs Jayanti Mohapatra deputy director, Door Darshan Kendra Bhubaneswar while attending the work shop as resource persons delivered her speech with regard to role of media in addressing gender biased sex selection, she maintained media is often considered as mirror of the society, the main object of the media should be to inform and educate people, media is a method to connect with larger number of people around us, so several forms of media as Radio, TV, Cinema, magazines, news papers, internet should take care highlight the burning topic of gender discrimination issue, she revealed.