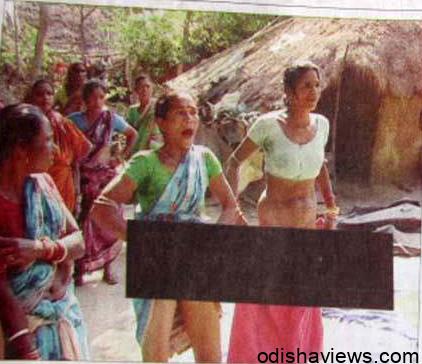 A large number of women and adolescents converged at Mangalapada village and held a public meeting on the eve of the international women’s Day on Friday evening and discussed how it is time world salutes the modern woman who has traversed a long road reaching to be compared with their male counterparts but a strange incident occurred yesterday at Patana Hat when anti Posco outfit used few women those went semi nude and staged protest opposing Posco project and deployment of police in Govindapur amid land acquisition process.

Susama Swain an educated woman from govindapur village who was leading the celebration and protest meeting while speaking on the occasion described a woman has democratic rights to resist on any wrong doing but it does not mean to show indecency to run semi nude at a public gathering, so the violators should punished, mainly the anti Posco leader Abhya Sahoo who abetted the incident should booked forth with, she demanded.

Another women leader Manju Dalai extended thanks to district collector S K Mallick and superintendent of police S B Bhoi on the yesterday Patana hat incident who took timely step resorted Lathi charge dispersing the mob and prevented such unruly women showing sex during protest and saved the women’s face in society.

However sources said that for the first time women folk of the locality untied in a public platform and hosted international women’s day and discussed fortifying women’s rights and dignity.