[dropcap]S[/dropcap]tandard of Living refers to the necessaries, comforts and luxuries which a person is accustomed to enjoy. It can be defined as the mode of living. In other words, the standard of living of the people means the quantity and quality of their consumption.
There is a lot of development with economic growth in India but it is not at all balanced. There are a few who are mega-rich and many live in very difficult conditions. The living standard of about 60 to 70% of the population is not satisfactory because they belong to the economically weaker section. This is the result of poor or non-existent planning, and the policies to keep majority of the people deprived of the best facilities. Planning can be done and the best facilities can be provided only when there is a clear vision with a comprehensive balanced growth program.

The income levels of Indians have increased phenomenally over last few years and so is the standard of living. The economy is on the rise and India is coming out from called a third world country to a developing country. 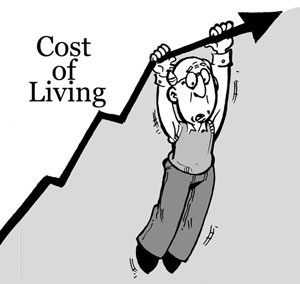 Generally it is observed that educated people tend to have high standard of living on the contrary the illiterate people are reluctant to improve the living standard even though they are provided large income. Different countries are having different price levels. The country having low price level can provide good standard of living to its people.