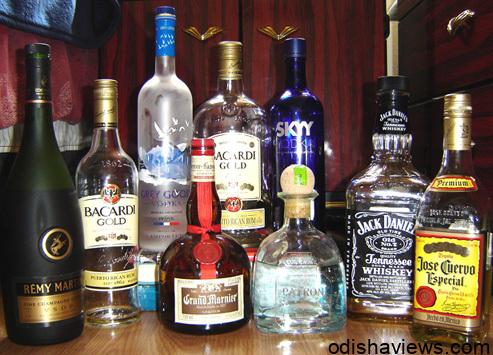 The term prohibition denotes a ban of the sale and consumption of . The consumption of liquor in India is very high with the vast majority of consuming country. The word prohibition first came in to the limelight during the Janata party regime under the premiership of Morarji desai. Who felt the consumption of liquor was doing more harm then good. However if we examine the issue from a financial perspective it is obvious that the sale of liquor generate huge funds for the Govt in the from of excise duty and sale tax. Unlike the cold European countries where a drink becomes essential to regulate body temperature. In India drinking is more of a social statement inherited from the British. But today it has become a regular feature.
Efforts by the different Governments to ban drinking have proved to be counterproductive to society as well as the economy. Beside the huge deficit in revenue for the state govt due to prohibition. It led to the growth of illicit liquor manufactures who more often then not sold spurious spirits,the consumption of which took many lives. Many of those killed happened to be sole bread winners and their death ended up destroying their families. Particularly for the daily wage earners hooch is a killer drink. The Government soon realized this problem and remove prohibition from many state. Today with the exception of Gujurat where prohibition is still in force, all other state including Andhra Pradesh and Haryana have lifted the ban on drinking.
In India drinking is considered to be taboo and there are several misconceptions regarding it. There is no doubt that more often than not people drink too much create a nuisance sometime commit crimes. But banning the sale of liquor is no answer as prohibition encourage the illicit brewing of liquor. It is more important to educate the illiterate masses about the evils of drinking and stress the need to drink within limits. Drinks are not bad but excess that is kills. Moreover even the medical profession recommends drink as a remedy for some elements. And in the Arm forces drinking is a part of the army life style. As it is said the excess of anything is bad and the same goes for drinking too