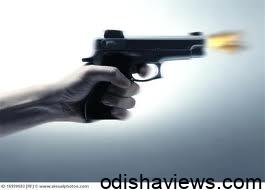 JAGATSINGHPUR  Feb 17.  Two separate firing incidents occurred on the outskirts of Jagatsinghpur police limits on Saturday night for which three anti socials received hurt and now undergoing treatment at SCB Medical College and hospital Cuttack but no  body was arrested till Sunday.

Report said that the first firing incident occurred at Dihasahi Bazar 5km away from here when three bike borne unidentified anti socials opened fire to three youth traveling in a bike. Two youth sustained injuries they were identified as Rajesh Bhola and Laxmidhar Beura all hailing from Niali area under Puri district. The injured youth had rushed to Manijanga hospital for treatment where they sent to the SCB Medical, Cuttack for treatment on Saturday night.

After the news reached police headquarters, a man hunt had launched and a police team rushed to Singhipur village where cops suspected the anti socials involved in firing incident were hiding, police anticipation found true on arrival of the police the anti socials started firing to them, on retaliation police too used firing on self defense for which one anti social Saroj Swain from Singhipur village received hurt and others managed to escape. Police brought the injured anti social to head quarters hospital in critical condition and sent to SCB Medical College and Hospital, Cuttack on Sunday night when his condition turned turtle.