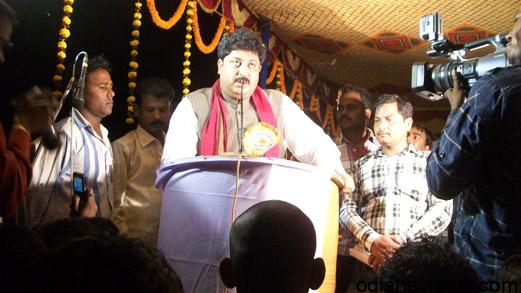 JAGATSINGHPUR . To promote and develop the game cricket for men and women from gross roots level in Jagatsinghpur district and provide the right opportunity to the deserving young talent, Paradeep based trade union leader and social activist Bapi Sarkhel has planned building a cricket academy by own fund and the proposed academy would provided good cricket grounds, cricket wears, cricket kits, shoes, coaches, physical trainers to the cricket fondly youths in district.

Attending as chief guest in a cricket tournament’s prize giving event held at Rahama on Friday Sarkhel said surely this is a known fact that cricket has come number one game in country even flourishing at the global level but gross roots level cricket in country has not much developed, there are many talents hiding in village level we want to develop their talent and provide a platform making them good cricketers in coming days as result he decided to start a Cricket academy in Jagatsinghpur district.

Efforts have been started to search and indentify the young cricketers living in district after the drive completed we will include them in our academy and give proper coaching through national repute coach and provide all cricket related assistances free of cost with a motive building a strong cricket team in Jagatsinghpur district. He maintained.

Reiterating two cricketers Ranjiv Biswal and Devasis Mohanty who were represented to national level and had opportunity playing international cricket were proud sons from Jagatsinghpur district, so there were no dearth of cricket talent in district but we have to identify them and build them, Sarkhel revealed.

Sarkhel was cricket fondly since his childhood; he first came to lime light when he took franchise of the Jagatsinghpur team in the first time version of the Odisha premier league [OPL] by paying Rs 36 Lakh to Odisha Cricket Association. he had named his team as JSP Spark even his team lost match but his team was eying for the next year OPL, but sadly the OPL abruptly closed in subsequent year due to few undisclosed reasons so Sarkhel suffered a huge loss but his enthusiasm in cricket still exists when he wants to rejuvenate cricket in Jagatsinghpur district, sources informed.

Responding Sarkhel’s endeavor district cricket association president Satya brata Mohapatra described a good effort identifying youth cricketers from district, he admitted there were many cricket talent but succumbing due to lack of sponsorship and patronage, he maintained.