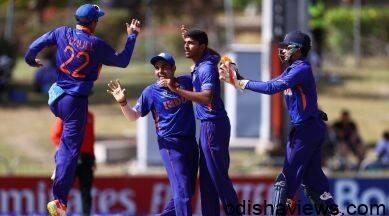 The Indian team reached the finals of the ICC U19 Cricket World Cup owing to an even-ball century by skipper Yash Dhull (110) and his 204-run partnership for the third wicket with Shaik Rasheed (94).

The team scored a 96-run victory against Australia in the semi-finals of the ICC U19 Cricket World Cup. India will take on England in the final match of the tournament.

India has been the most successful nation in ICC U19 Cricket World Cup history with four titles. This is the fourth successive final that the Indian team has qualified for. India last won the title in 2018 in the biennial event and had lost to Bangladesh in the final two years back.

In reply, Australia U19 succumbed to the pressure created by the India U19 bowlers in the middle overs and lost their way despite a fighting half-century by Lachlan Shaw (51 off 66) to be eventually restricted to 194 all out in 41.5 overs, falling short by 96 runs.