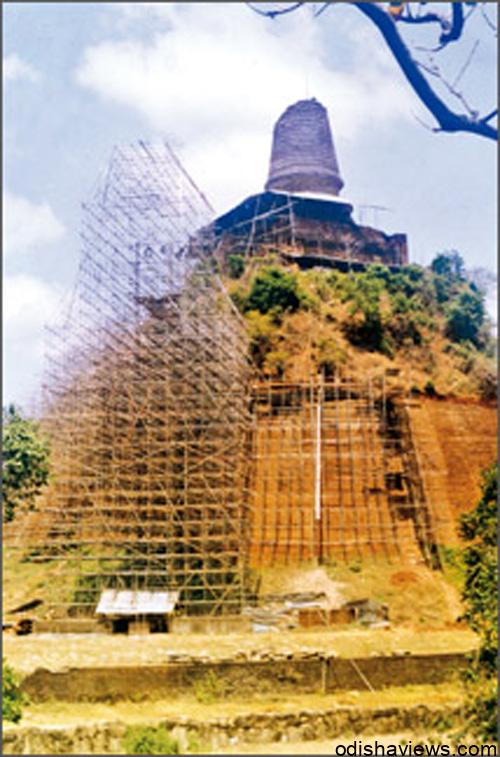 1.This is Abhayagiri dagoba under renovation.

3. Researchers from Cambridge University dated these to 500-600 BC. The dates have been accepted by foreign experts. Buddha’s year of birth also falling between 500-600BC period. That mean just after Buddhism developed in India it was reaching Sri Lanka through navigation.

4. The letters in the writings were almost identical to the Asokan script used 200 years later in India.

5. It clearly shows Asoka just following Buddhism and Buddhism was developed much before in Sri Lanka by Kalingan,

6. A tile with ‘Anuradha’ scratched on it, in what seems to be prakrit letters, was found by students at the excavation level dated to 900 BC. The place name now is Anuradhapur may be due to its ancient name and the tile proof this.

7. Historian thinks that Sri Lanka probably received the Brahmi script through the sea route from Kalinga. Kalinga is the best option , again named Tissa a Sinhala king named in Kalingan Edict at Dhauli will be an added proof.

8. The great Bodhi-tree at Anuradhapura is an offshoot of the Great Bodhi tree seated under which the Buddha attained Enlightenment, and thus remains the oldest historic tree in the world, Sri Maha Bodhi planted at the ancient Tissarama by king Devanampiya Tissa in the 3rd century BC. Since then the Bodhi tree shrine remains to this day the most venerated sacred monument worshipped by world Buddhists .

10. Asoka is just politically utilised the Buddhism to retain its monarchy.

11.Those who are advocating Asoka champion of spreading Buddhism out side India then they should think how Hinduism develop in Indonesia and south east Asia? Ramayan in Bali and Odishan ‘Danga Bhasa’ celebrated in Thailand as ‘Loy Krathong’ festival developed by whom? Magadha, Kalinga or Asoka?