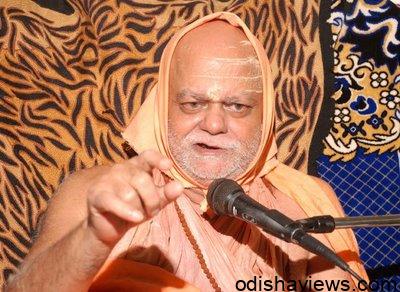 JAGATSINGHPUR Apr 20. The Puri Gobardhan Pitha sheer Swamy Shri Nischalananda Saraswati during his three day visit to Jagatsinghpur district attending in several religious occasions spelled out cow slaughter continuing uninterruptedly even in law of the land has banned it, cow meat being transported illegally to few Arabic countries even to Bangladesh through border, he urged the union and state governments to implement strict law to prevent cow slaughter in country.

Delivering his speech in a religious discourse at Gothada Mattha near Naugaon block on Friday Swamiji said India being culturally exploited even today, there was an attempt to destroy Ram Sethu Bandha , Ganga river water being over polluted , meanwhile Himalaya Mountain is being verge of destruction so the Hindu’s supreme religious mentor suggested government should implement action plans to protect River Ganga and Himalaya Mountain meanwhile he urged true Hindus of the country to be united and resort peaceful protest across Bharat pressing government’s attention for its protection.

However Swamiji who heads one of the four main religious seats of Hindus in the country at Govardhan Pitha Puri added Indian culture was getting rich by Rama, Krishna, river Ganga, Mountain Himalaya and cow s and India could not be depicted without all these. We sheers of the country are proposing to organize a mega conference and an action plan would be prepared for the protection of all these inseparable Hindu’s religious faith, so he asked people to participate with them, Swamiji said.

While blaming politician of the country Swamiji said they eventually are playing dual role for country’s governance one during election then after capturing power, they are cheating electors by placing false promises during elections and least concern about people’s sufferings after seating in power, it happens due to illiteracy and lack of consciousness among voters so Swamiji stressed voters should first educate about democracy and election, each literate Hindu’s should work for this matter, he suggested.

Swamiji was on a three day visit to Jagatsinghpur began from Thursday attended religious gathering at Naugaon, Balikuda and Rghunathpur blocks, he was greeted by several organization, saffron parties and locals in different locations and returned Puri on Saturday evening.