Mr.Prasant Padhi is a famous Ollywood music director/composer and singer. He is born in Berhampur on June 26th, 1961, in Odisha. He has done his schooling from M R High School, Sonepur and graduated from SKCG College, Paralakhemundi. From childhood, he has been inclined towards music and started music education along with study. He also learned to play the harmonica. 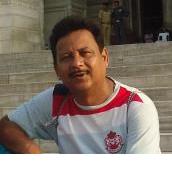 Mr.Anam Sahu (producer) always takes risk and brings in new talents to film industry. He brought Mr. Prashant Padhi to feature films in 2008. Then his big break came through Lakshmi Puja production’s first film ‘Nandini I Love You’. That marked a major milestone in his career.  From that point on, he is well established, and is able to be the music director for a number of major superhit features films. Since then he never looked back and has composed for ‘Mita re Mita’, ‘Dream Girl’, ‘Prem Rogi’, ‘Bhool BujhibaniMote’, ‘Sanju au Sanjana’, ‘Mana Khoje Manatie’, ‘Mu Premi Mu Pagal’, ‘E Mana Khoje Mana Tie’ ,‘Sapath’ and ‘Emiti Bi Prema Hue’. He has number projects on his kitty and busy with composition of upcoming films like ‘Rajanandini’, ‘Kouthi Achha Tame’, et al.

Mr. Prasant Padhi not only changed the perception of everyone, but also demonstrated himself as one of the finest &fully-rounded music director/composer starting from classy to modern to western. As a person; he is very humble, gentle, talented and down to earth person with excellent attitude, these qualities not only established him a nice person but also ollywood’s most sought after music director/composer.