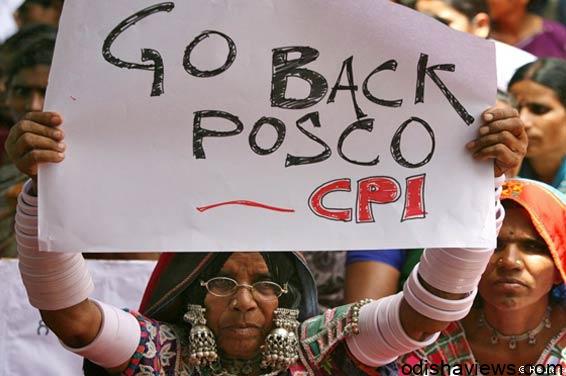 On turn tension gripped in Govindapur village the agitated villagers accompanied by children and women continued their stir backed by project opponent leader Abhya Sahoo who has started an indefinite hunger strike from Tuesday wee hours demanding complete discontinuance of land acquisition works and withdrawal of police force from the Govindapur. While reports indicated that no senior civil and police officials including collector and superintendent of police had visited the agitation site taking advantage agitated protestors had Gheroid the makeshift police camp erected there for entire day but no untoward incident reported so far, sources added.

Meanwhile CPI national secretary and Member of Parliament D Raja has joined in the ongoing Posco stir from Wednesday night who attended a public meeting held in Patana village on Thursday afternoon. the leftist veteran reiterated in his speech immediate withdrawal of the police force and discussed the legality of the land acquisition by Odisha government for the Posco work which sans legal sanction and absence of a renewed MoU between Posco and Government.

However district administration maintained complete silence over the restarting land acquisition and withdrawal of police force from the Govindapur village simply quipped waiting state higher ups instruction for the event , there had been demand s pouring from political parties and right bodies to stop the land acquisition as Posco steel project issues are pending in judicial scrutiny so government is considering the ground realties and a decision would be taken soon for restarting the land acquisition and betel vein demolition, informed district collector S K Mallick.