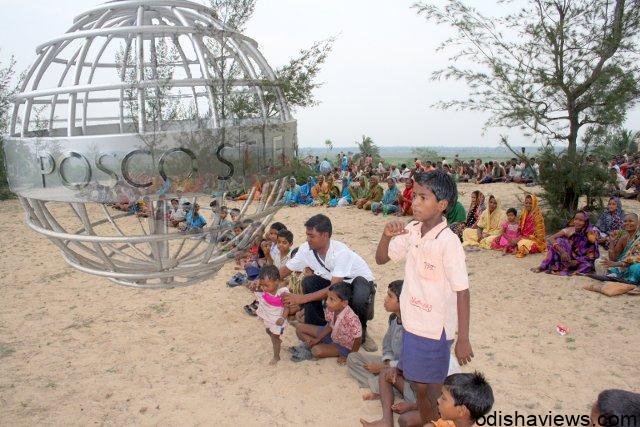 Paradeep Dec 28. In a major breakthrough civil officials led by district collector S K Mallick visited proposed Posco site villages on Thursday evening to study the ground reality and win the hearts of the people with regard to restarting the project work. In the flip side project supporters and villagers were no qualm to oppose the administration bid, moreover reiterated their old claim to fulfill their six point charter of demands before launching the project work.

District collector during his maiden visit categorically informed the villagers that state government is ready to start the project work after taking locals in to confidence soon and all set fulfilling their old claims and demands, on response United Action Committee [UAC] a pro project outfit of the locality did not pay any enthusiasm and stated several times administration had given them assurance but unable to materialize the promise so it is ironic to rely on the administration promise so we reiterated our old stand first fulfill our six demands then approach for the project works, rued Anadi Rout , UAC head.

Sources said about 11 victims those had sacrificed their betel vein for the Posco land acquisition in the year 2007 had lodged complain saying administration yet to give them compensation, about 26 land losers too sounded denial of compensation till date , acting on the complaint collector assured the affected land losers that their due compensation will be awarded at earliest.

Collector first stepped at Noliasahi village and held discussion with villagers then returned to Nuagaon Panchayat office where interacted with the UAC members and villagers. Many villagers did not fear to speak against administration and Posco, the R& R policy of the state government meant for industrial displacement ignoring them the betel vein dependants those lost their livelihood following demolition of betel veins in the year 2010 yet to get monthly remuneration, they smelled complaint.

However UAC leader Tamil Pradhan demanded convening RPDAC meeting before starting of the project work and land acquisition, two months ago Revenue divisional Commissioner had visited Posco site and assured the RPDAC meeting would be convened soon but nothing happened till date, he described the RPDAC meeting will solve the Posco crisis, he maintained.

Another pro Posco leader Nirvaya Samantray viewed locals have lost hope starting of the Posco project, bowing pressure from anti project people and succumbing from few undisclosed reasons the project work had halted, the new initiative by the state government and administration have nothing new, a time killing endeavor, he maintained.

Collector who had accompanied a group of senior civil officials during his visit quipped mega projects are always associated with problems like land, water, raw materials and local resistance but the issues would be resolved through dialogue with anti and pro project people of the locality, during his visit he gathered few complaints pertaining project works and allegations from villagers would be rightly considered in government level, collector said.