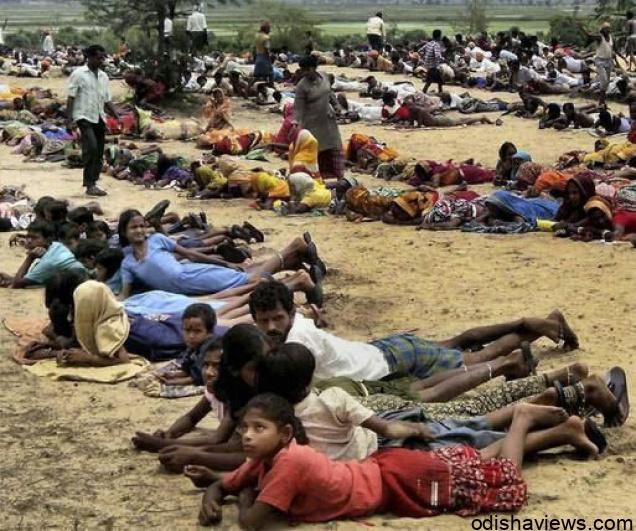 JAGATSINGHPUR Jan 15.   In a major twist anti Posco protestors from Dhinkia village has started their agitation against South Korean steel major accompanied by their children, began a Dharana at Balitikra along Govindapur- Nuagaon border from Monday. About 40 children including hundreds women and Activists of Posco Pratirodha Sangram Samiti [PPSS] prostrated on the sand for around hours on Tuesday  and held a protest meeting , where Jagatsinghpur MP Bibhu Prasad Tarai, Biswa Manabika Adhikar surakhya Sangha state president Abhinna Hota including PPSS leaders Abhya Sahoo, Sisir Mohapatra , Manorama Khatua were spoke on the occasion.

The anti Posco leaders reiterated their old claim saying the anti Posco stir will continue till the government and Posco withdraw the project from the proposed site , leaders cutting across party affiliations including civil society bodies , NGOs have consented to take part our agitation. PPSS leader blamed state government saying when the new land acquisition Bill is yet come up in coming parliament session which is expected to give more teeth to the victims of industrial displacement, Odisha government trying to acquire Posco required land before the bill tabled in Parliament session as consequence this haste action would be thwarted by agitation so we began our agitation from Monday will continue till indefinite period.

MP Bibhu Prasad Tarai expressed his support to the agitation and said once his party CPI has endorsed a resolution in just concluded executive body meeting held in Bhubaneswar opposing Posco so the decision would be maintained with letter and spirit, MP said.

On the other hand civil administration has halted any Posco work considering the agitation is getting momentum, more significantly it becomes a headache for the civil and police officials to counter the agitation as kids and women were part of the stir, they are being used as shield against any police action, informed a senior district officer.