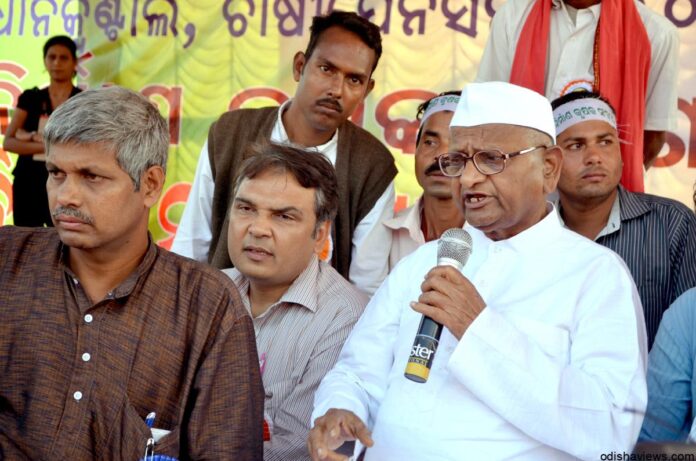 JAGATSINGHPUR Nov 30. The anti –corruption crusader Anna Hazare on Friday maintained government has no right to capture farmers land for any foreign direct investment [FDI] big project; moreover people enjoy absolute rights over all natural resources as forest, water, river, minerals, farmland, when government wants to interfere these natural resources for any purpose, people should be taken in to confidence through Grama Sabha.

Addressing a state level farmer’s conclave here hosted by Nava Nirmana Krusaka Sangathan, Anna said India became free after 300 years British rule, now the present government is inviting foreign company giving liberty in industrial sectors which is not good sign for the country, these FDI companies will capture India in future, yesteryears foreign rule would be restarted ,so he appealed attending farmers to oppose the government’s endeavor and praised efforts taken by people of Jagatsinghpur have been resisting country’s highest FDI project Posco since it signed MoU with Odisha government.

Speaking at the meeting Anna said earlier he had taken Corruption a core issue of country now he moves another issue relating to farmers and their woes across the country, since 65 years of independence no successive governments of the country have taken steps benefiting farmers, all the time farmers have been exploited by middle man, money lenders and anti farmer policy launched by governments as consequence committing suicide sustaining financial loss and being debt traps in agricultural hammering, so he demanded gigantic investment on agriculture sector failing this proposal farmers and peasants would not be remained salient, a farmers movement would be begun across the country and assured the attending farmers he will lead the movement until the perpetual demands of farmers were not met, Anna assured.

Speaking on parliamentary democracy Anna described Parliament or legislative assembly each is like a temple so good people should elect to these august houses so they would make good laws for the country benefiting people delivering good governance, but in present scenario at least 63 MPs in parliament have criminal background and criminal cases pending against them, about a dozen union ministers are facing corruption charges, so a government cannot deliver good governance unless good candidates are elected to parliament, eying 2014 election I will start my country wide tour from January 2013 with a motive to educate voters and countrymen to elect good people to legislative bodies, for making a vibrant democracy in country, Anna disclosed.

Saying on the union government endeavor on Jan Lokpal bill Anna said the congress led UPA government has brought a weak Lok Pal bill in diluted form it will not check corruption so we want stringent Lokpal bill which will end at least 60 percent corruption in country and his fight would be continue until government did not bring a Lokpal bill what he desires.

Remarking Arvinda Kejirwala’s Amm Admi Party, Anna said Arvind and I are fighting for one goal how to eradicate corruption in society, meanwhile Arvinda has floated a political party, if his party gives good suitable candidates in coming elections I will campaign for them, said Anna.

Anna called upon young farmers attending the conclave that the youth power is the country’s real power and they can change the entire system of maladministration in government machinery once they united with a commitment to fight against corruption.