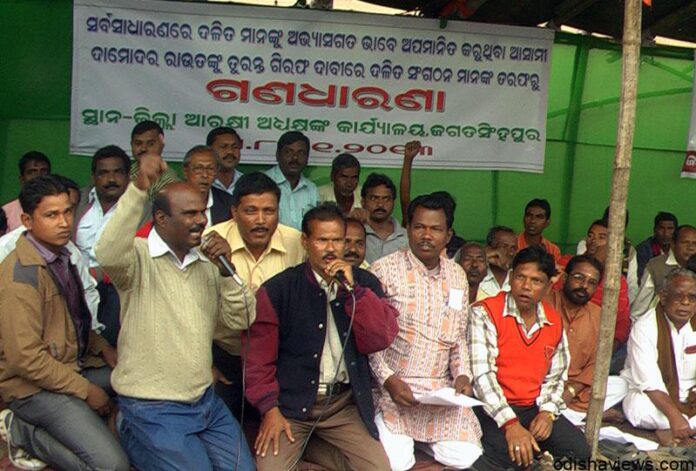 JAGATSINGHPUR Jan 08. Hundreds of Dalit people including women on Tuesday staged demonstration and Dharana in front district superintendent of police office here demanding action against state cabinet minister and Paradeep MLA Damodar Rout for his anti Dalit remarks he had delivered in several occasions. The protest was led by Dr B R Ambedkar Scheduled Caste & scheduled tribe Sangha , a pro Dalit organization working in the state including its other downtrodden people counterparts here fumed against cops shielding minister Rout for his repeated anti Dalita stance. speaking on the protest meeting Dalita leaders cited in the Kujanga case for which minister Rout had obtained bail form the court surprisingly violating his bail conditions he again delivered anti Dalita remarks in a social function held in Paradeep on 24 October 2012. Even Paradeep police have registered a case against Mr Rout but no action had taken till date as consequence the matter has irked our community, rued Manoj Bhoi a Dalita leader; however Mr Bhoi demanded immediate cancellation of Minister Rout’s Bail.

Moreover Dalit people expressed strong resentments saying numbers of Dalita oppression cases are growing in district even a police officer Susanta Satapathy had ill treated few Dalita women in Naugaon area two months ago but police remained defensive and no action had taken against the cop, so we demand action against the alleged police officer, few Dalit leaders smelled anguish at the protest meeting.

Official sources informed the day long Dharana was called off when a group of Dalit leaders met district superintendent of police on Tuesday evening in his office and the district police head assured the agitated Dalita leaders that the cases pending against Mr Rout would be investigated and action would be taken as per law, with regard Mr Rout violated his bail condition, SP maintained he is examining the allegations if found correct minister Rout would not be ran away in the eyes of law, SP said.