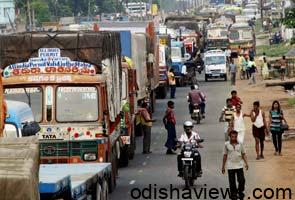 Traffic problem is one of the major problem of India . you must draw attention not only towards the worse to worst traffic situation but also towards the attitude towards people show while travelling, which is very common thing in India.

it is known that Buses, Cabs are a part of Public transport but moreover these are, owned by private individuals… they thought even the roads are their private property. These private buses can stop in the mid of road , bringing the traffic on halt.. As if only they are on the roads, to pick up a passenger they can stop anywhere  for unlimited time not bothering whether people are disturbed by this behaviour. They Can stop any where for picking a single passenger But not give the enough space to sit. Conductors behave with the passengers as if they are taking us on a free ride.

They shout, push , abuse the passengers as if one has made a big mistake by taking their bus. In case a passenger oppose this behavior, , whole bus will just behave like mute sheep n wait for this to happen with them… They don’t get united in opposing such rowdies…….

Almost 10% of the global road traffic accidents occur in India. Much of the world wide web is full of sarcasm & mocking of the indisciplined driving on Indian roads. Unfortunately in since 60 years since independence the authorities have failed to publish a National Highway code. Licences are given to anyone which has only ability to the clutch-accelerator, consequently the motoer driving schools teach just that and no more. Blindspots, principle of MSM, the tyre & tarmac rule, 2 second gap and most important rules are not known to the average Indian driver.

There so many school for providing driver education and training to all Indian road users. Most comprehensive website providing training in defensive driving. So keep driving slowing and get safety life………