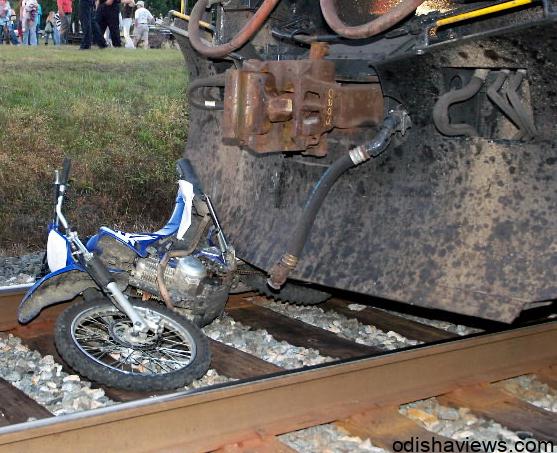 JAGATSINGHPUR Mar 1. In a tragic mishap Paradeep- Palasa passenger train rammed a light motor vehicle [LMV] at Barunai label crossing on Cuttack- Paradeep rail line 20 km away from here on Friday afternoon, the deceased were identified as LMV driver Anil Mohanty [27] hailing from Nuagaon village under Biridi block and Siva Singh [57] a resident of Batimira village and the ill fated vehicle had been completely damaged .

Report said that the LMV was coming from Kamarpada towards Biridi when it was crossing the Barunai label crossing suddenly it went non operational and put halt on the rail line subsequently the passenger train which was coming from Cuttack rammed the LMV at the spot. The LMV driver died on the spot and another Siva singh sustained injuries and immediately shifted to SCB Medical College and hospital for treatment where he succumbed to his injuries on Friday evening, police informed .

Meanwhile railway police have registered a case after conducting deceased duo’s body postmortem at Cuttack and seized the damaged LMV from the spot; Rs 10,000 had been given to each deceased kin by Biridi Tahasildar. A palm of gloom descended after the tragic incident occurred at the spot, hundreds of local residents gathered at the accident site and resisted appointing a guard in this label crossing, police and magistrate rushed to the spot and held discussion with the agitators and assured they will take up the matter to the East coast railways authority for early taking step over their demand, then the agitation was called off.