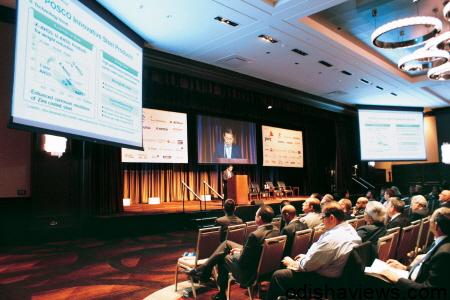 CEO Mr. Chung Joonyang who was invited as a highlight speaker after theannouncement of the rankings introduced `POSCO`s Growth Story and FutureStrategy,

CEO Mr. Chung introduced that he has strived for continuous growth throughleading innovative activities and firmly establishing a global managementsystem for the past 4 years, and added global competitiveness with uniqueinnovative technology and high value added product development which haveallowed maintenance of the world`s highest competitiveness.

CEO Mr. Chung especially received heated responses from the delegates whennoting that becoming a `loved company` which involves establishing a healthycorporate ecosystem with POSCO`s unique concept of the stakeholders, SPICEE(Society/Partner/Investor/Customer/Employee/Environment), and grow and succeedtogether is POSCO`s future. WSD has been analyzing the global steel market to find solutions to issues theindustry faces each year since 2002, and announces competitive steelmakerrankings based on evaluation in 23 categories including production scale,profitability, technology innovation, price determinativeness, cost reduction,financial stability, and securing of materials. Competitiveness of the world`ssteelmakers was evaluated in February and June this year selecting 34 companieseach.

Meanwhile, during the Q&A session after his speech, CEO Mr. Chunge mphasized that as the world`s economy is in decline, the world`s steelmakersmust come together against trade protectionism to resolve intensified tradedisputes within the steel industry.

Meanwhile Q&A session after his speech, CEO Mr. Chungemphasized that as the world`s economy is in decline, the world`s steelmakersmust come together against trade protectionism to resolve intensified tradedisputes within the steel industry.