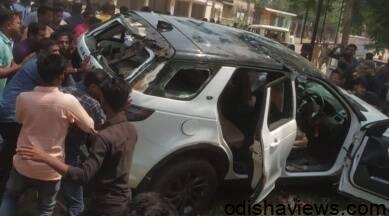 Prasanta Kumar Jagadev, an Odisha Assembly legislator, allegedly rammed his car into a throng in Banapur, Khurda district, on Saturday, police said, in a weird occurrence similar to the Lakhimpur Kheri case.

Around 11 a.m., the event occurred outside the Banapur block office, where an indirect election for block chairman was taking place. The event harmed several persons, including ten police officers.

Following the incident, enraged citizens physically assaulted the MLA, who was first brought to Tangi hospital and then transferred to a Bhubaneswar hospital. The mob damaged and flipped Jagadev’s automobile.

Alekh Chandra Pahi, the Khurda SP, told reporters that the situation is now under control. According to preliminary information, the MLA arrived at the block office during a rally for the election and attempted to enter his vehicle amid the gathering of BJP-backed Panchayat Samiti workers, he added.

Police officers and others attempted to prevent the MLA from entering the gathering.

The incident injured ten police officers, including the Banapur IIC, the MLA, a journalist, and at least six other individuals, according to the SP. He stated that no casualties have been reported so far.

All of the injured, including the MLA and IIC, have been transported to Bhubaneswar for treatment, according to Pahi.

The SP promised that anyone responsible for the event will face serious consequences. The area’s security arrangements have been reinforced.

The Biju Janata Dal (BJD), led by Chief Minister Naveen Patnaik, dismissed Jagadev in September after a video went viral showing him thrashing a BJP leader in his Chilika constituency.

The lawmaker is well-known for his ‘indecent’ behavior. A junior engineer filed a complaint in August 2020, stating that he had misbehaved when reserving a guest accommodation. Prior to that, he was in the news in 2016 for reportedly attacking a female Tehsildar.