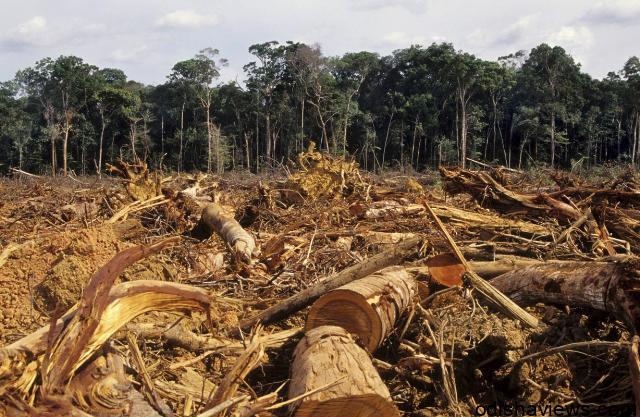 JAGATSINGHPUR . A massive green murder is underway with the government targeting over hundreds trees on the Kandarpur- Jagatsinghpur stretch. Many of these leafy trees have been dotting the road after devastating super cyclone 1999, has been axed by the Roads& Building department [R&B] with support of local forest department. About one thousand trees have already been lost in past one week and at the end of the exercise a total few thousands trees will be chopped down along the stretch , the tree felling is being done to widen the road connecting Jagatsinghpur headquarters from Cuttack , as per official information’s.
The trees that were chopped down from Jagatsinghpur outskirts to Tarikunda till date are mostly fully grown trees that have been lining the stretch for the past one decade. Many of the trees that chopped were planted during 2006 under avenue plantation drive launched by local forest department with financial support from IFFCO Para dip unit who had given Rs 50 Lakh from its CSR funds for developing roadside plantation in Jagatsinghpur.
Over 20,000 saplings had planted in this stretch from Jagatsinghpur headquarters to Kandarpur during the drive, interestingly the local R&B department had ignored. Who had complained that planting the sapling both the side of the road is not suitable following a road expansion proposal had been pending at government level moreover the executive engineer had raised objection-planting trees just few meters from the existing road is not conducive. In this regard, the then Jagatsinghpur R&B division executive engineer Gouranga Sahoo had petitioned district collector Satya Brata Sahoo and forest department but his objection had overlooked and the plantation drive had moved without halt.
However, allegations were rife that serious mismanagement and bungling of funds had reported by forest officials and sapling supplier during this plantation drive but district administration whom IFFCO had given funds for this plantation drive responded silence ignoring numerous public complaints.
Environmental activists and tree lovers from here who have witnessed the ongoing felling said that the R&B and forest departments had not sought an opinion from any environmental expert before undertaking the widening activity. Even the Tree Protection Committee, which was set up to check such brazen felling of trees, was not consulted before the tree felling started.
According to environmentalists, several trees along the stretch could have been saved if the plantation drive are done due properly consultation with R&B department earlier, they suggest that first solution to reduce the impact of road widening was to acquire land on just one side of the road. This would have saved the trees on the other side. Even such a simple procedure was not followed by the Roads and Buildings department,” said an environmentalist who inspected the place.
“Had we been informed, we could have inspected the site and marked trees that could be saved or even relocated. But no one informed us the forest department is chopping trees past one week armed with police and magistrate , rued Naresh Kumar Jena a Prakruti Mitree awarded environmentalist here.
Environmentalists said that this is not first time that such an exercise is being done on the sly. “In the case of Cuttack- Para dip state highway expansion a similar case of massive tree felling was undertaken. Responding huge public out Cray R&B department had added massive plantation drive with systematic manner to develop roadside greenery, report said.
.
Prominent conservationists from here said that the government should take responsibility for coming up with an environment sensitive plan for road widening. Usually trees are planted most of them about 40 to 50 ft away from the existing road when road expansion is undertaken most of the trees have forced to cut down .
Environmentalists said that the actual road-widening plan itself is flawed, as there is not much of vehicular traffic on Cuttack- Jagatsinghpur road. As per law the authority has to follow a long process before they can legally chop down a public tree, in this case was not even waiting to let the legal process take its course even the authority is unclear obtaining permission from state environment department for tree felling. The legal process postulates that the authority to issue a notification about its plans to bring down trees wait to hear and resolve public objections before going ahead.
The vehicular traffic has remained more or less the same in the past one decade we need road development as consequence widening of Kandarpur –Jagatsinghpur road has undertaken for developing its width to 7 meter so tree felling is going on. Forest department has entrusted for the work after the work was completed massive plantation drive would be undertaken, informed R&B division executive engineer Bibhuti Bhusan Mohanty. On the other hand, local forest department range officer became unable to contact in spite of repeated calls for taking his comment.
Meanwhile public resent that a lot of money and monitoring is required to ensure that every sapling planted maturity, after super cyclone a good plantation drive had undertaken on Jagatsinghpur- Cuttack road but for widening the road its mindless chopping is not public good so we demand to halt the process till end of summer, rued many road side denizens.