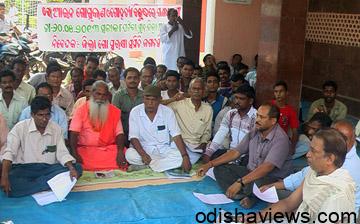 AGATSINGHPUR May 20. The Gou Surakhya Samiti an outfit of saffron party here staged demonstration and protest meeting in front of collector office on Monday demanding complete ban on cow slaughtering and illegal transportation of cows from Jagatsinghpur district. The Samiti activists under leadership of district BJP president Upendra Biswal took out a rally from Gandhi Chhak and converged at collector’s parade ground and held a public meeting. Addressing the gathering cow lover Samiti activists fumed against civil and police administration for its callous act for non implementing cow slaughtering Act and rules for protecting cows, every week hundreds of cows are being transported from several Hata’s across the Jagatsinghpur district disobeying several laws protecting these hapless bovine but civil and police administration fail to protect these animals from the clutches of butchers, so they demanded strict implementation of Cow protecting laws in district. Later the Samaiti members had submitted a memorandum containing 5 point demands before district collector and the agitation was called off at noon. 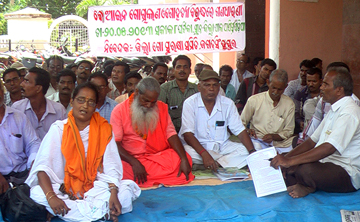