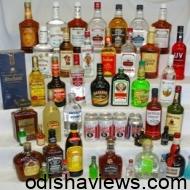 JAGATSINGHPUR  FEB 14. Hundreds of Dalita women from Arakhapari village under Alanahat Panchayat in Naugaon block retrieved huge quantity of foreign liquor illegally stored in vendor house in village on Thursday morning later the alleged liquor handed over to police. Report said that women folk of the  village has banned  consumption of liquor in village ,  one illegal liquor vendor Bana Bhoi from village had transported the liquor and stored in his residence on Wednesday night after the news reached  hundreds of Dalita women rushed to the Bana’s residence and captured the liquor and informed police about the liquor, but the vendor and his associate managed to escape from the spot and police seized liquor and other intoxicant substance from vendor residence and registered a case against the vendor and a man hunt has launched to trace the absconded vendor, police said.