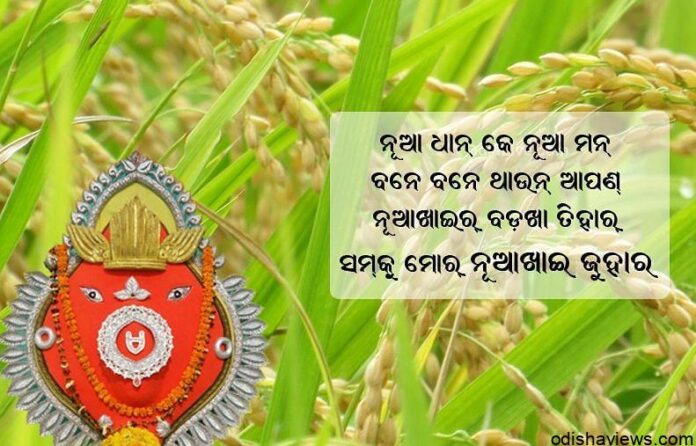 Nuakhai or Nuankhai (also known as Nabanna observed on coastal Odisha) is an agricultural festival mainly observed by people of western Odisha in India. This festival is celebrated to welcome the new rice of the season. According to the Hindu calendar, it is observed on Panchami tithi (fifth day) of the lunar fortnight of the month of Bhadrapada or Bhadra (August–September), the day after the Ganesh Chaturthi festival. This is the most important social festival of Western Odisha.

Nuakhai is a combination of two words, the word nua means new, and khai means food, so the festival is to celebrate the newly harvested rice by the farmers. It is also known as Nuakhai Parab or Nuakahi Bhetghat and is seen as a new ray of hope, held the day after the Ganesha Chaturthi festival. It has a big significance for farmers and the agricultural community. The festival celebrated at a particular time of day which is called lagan. Arisa pitha is prepared to celebrate this festival. When the lagan comes, the people first remember their village god or goddess and then have their nua.

Nuakhai is the agricultural festival of both the tribal people as well as the caste-Hindus. The festival is observed throughout Odisha, but it is particularly important in the life and culture of the tribal-dominated area of western Odisha. It is a festival for the worship of food grain and mostly celebrated in the Kalahandi, Sambalpur, Balangir, Bargarh, Sundargarh, Jharsuguda, Sonepur, Boudh, and Nuapada districts of Odisha.

Although the origin of the festival has been lost over time, the oral tradition dates back to the 12th century AD, the time of the first Chauhan Raja Ramai Deo, founder of the princely state of Patna[4] which is currently part of Balangir district in Western Orissa. In his efforts to build an independent kingdom, Raja Ramai Deo realized the significance of settled agriculture because the subsistence economy of the people in the area was primarily based on hunting and food gathering. He realized this form of the economy could not generate the surpluses required to maintain and sustain a state. During state formation in the Sambalpuri region, Nuakhai as a ritual festival played a major role in promoting agriculture as a way of life. Thus credit can be given to Raja Ramai Deo for making Nuakhai a symbol of Sambalpuri culture and heritage.

In the early years, there was no fixed day for the celebration of the festival. It was held sometime during Bhadraba Sukla Pakhya (the bright fortnight of Bhadraba). It was the time when the newly grown Kharif crop (autumn crop) of rice started ripening. There are reasons for observing the festival in the month of Bhadrava even though the food grain is not ready for harvesting. The thought is to present the grain to the presiding deity before any bird or animal pecks at it and before it is ready for eating.

People in Western Odisha starts preparations for the festival 15 days in advance. Nuakhai is understood to have nine colors and as a consequence, nine sets of rituals are followed as a prelude to the actual day of celebration. These nine colors include:

On this occasion, folk song and dance events are organized to display the local culture and traditions of the society.