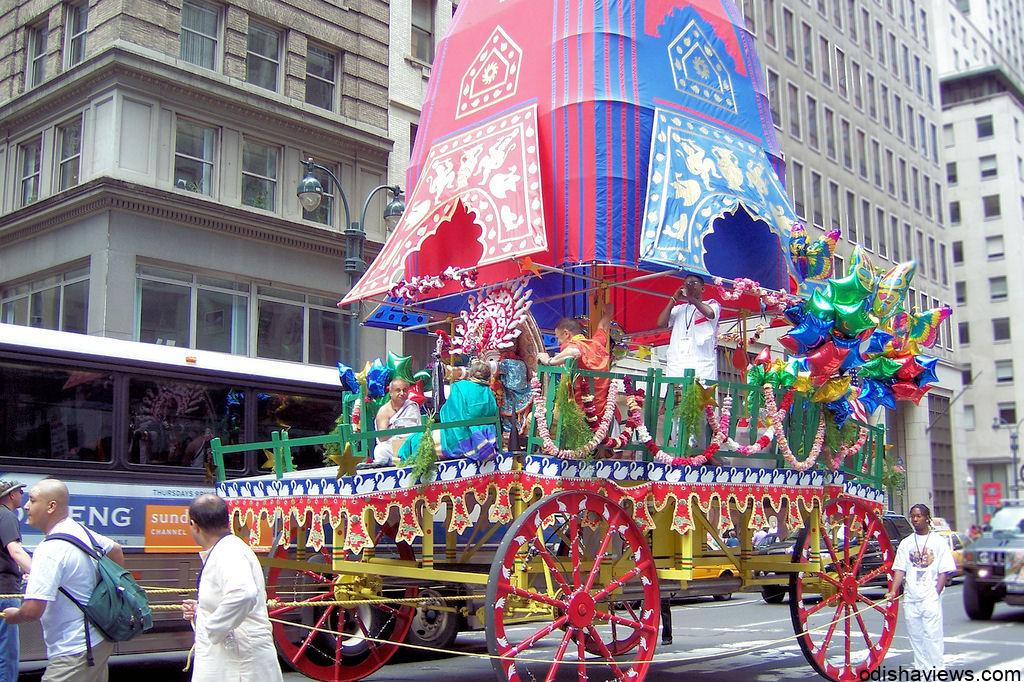 Lord Jagannath’s Car festival gets its act a day late.

Jagatsinghpur July 20. While chariots of lord Jagannath, Lord Balabhadra and Goddesses Subhadra are being pulled across the glove on Ashada Ditiya according to Odia Almanac in a glaring distinction chariots are rolled on next day in several locations of Odisha while the rituals like Pahandi, Chhera Pahanra are completed on Ratha Yatra day itself.
Although there are no historical facts to support this practice but a number of fictions have evolved over the years on this tradition in several parts of the Odisha.
While reports say that precedents are being followed in Baripada Ratha Yatra in Baripada, Surangi village in Patrapur block of Ganjam district, Prasannamani temple in Tigiria in Cuttack district and olden Jagannath temple in Jeypore and Kunjabihari temple in Gadakujanga under Erasama block.
The annual Ratha Yatra celebration in Kunjabihar Pitha Jagannath temple in Gadakujanga Panchayat is unique in the way that the chariot is pulled a day after the annual Ratha Yatra in Puri and the residents are observed two days consecutive celebrations since years.
According to local tradition proceeds that all ceremonial processions of the three deities and sweeping of chariots are performed on the day of Ratha Yatra and the three deities stay back in Bada Danda on that night till next day when the chariot is pulled next day.

Following the old precedent the servitors conduct the Pahandi procession, and perform rituals of the deities like Mangala Arati, Rasahoma, Surya Puja etc on Ratha Yatra day including sweeping ritual and chariots being pulled on next day, informs head priest of the temple Gayadhar Panda however reports say thousands of devotees of villages of Gadakujanga, Nuagaon, Govindapur, Noliasahi, Polanga, Dhinkia and surrounding Paradeep port town region are usually participated in this distinctive Ratha Yatra.
While locals and temple management were unaware about this solitary precedent and exact reason for this day late Ratha Yatra but public murmurs reveal that to pay respect to the Puri main Ratha Yatra the then ruler Sandha Raja of the region had adopted rule to conduct the Gadakujanga Ratha Yatra on day after, so the practice still exists, inform few age old residents of Gadakujanga village. .
However report say that similar a day late Rath Yatra is observed in Surangi village under Patrapur block of Ganjam district. Historical record shows that a Jagannath temple was built at Surangi located Odisha- Andhra Pradesh border by then king of Surangi in 14th century, locals and temple management there have been celebrating Rath Yatra a day after the famous festival of Puri.
The locals say that the then king of Surangi had decided to celebrate the Ratha Yatra at Surangi a day later than usual as because a famous Ratha Yatra at Jarada village about 5 km away from Surrangi is observed and everyone went to participate in this Ratha Yatra so there was no devotee in the village to pull the lords chariots on the Ratha Yatra day the king ruled the precedent Surangi car festival would held a day late.
Baripada car festival of Lord Jagannath has been accorded as second largest Rath Yatra of Odisha where a day late chariots pulling precedents are performed, significantly Baripada Rath Yatra too witnesses disparity as women folk of the locality are being pulled chariot of goddess Subhadra and this practice has been running since year 1976, to mark the international women’s day the then Odisha chief minister late Nandini Satapathy had adopted this precedence.
While a day late Ratha Yatra celebration too is witnessed in Jeypore but other rituals like Pahandi, Chhera Pahanra are conducted on Ratha Yatra day and the chariots were rolled on the third day of the fortnight of Ashadha instead of the second day.
The local popular legend reveals that, the then Jeypore palace was located at Purranagada instead of the present Jeypore town. Since the palace was shifted to Jeypore the festival is being observed at Jeypore. But the tradition of observing the festival at Purrunagada palace was kept alive, the practice of pulling chariots on the first day at Purunagada and on the next day at Jeypore is still prevails.
Moreover similar precedent pulling of chariot day after is in practice at Prasannamani temple in Tigiria village under Cuttack district. According to old tradition persists the four deities of local Jagannath temple are carried in ceremonial procession in Pahandi and stay back in chariot on Ratha Yatra day and pulling of chariot is being held on next day. While locals reveal the popular reasons that the then king of Gadajat usually visit Puri to wittiness the annual Ratha Yatra Lord Jagannath after he returns back from the fest, he performs sweeping ritual for the chariots and pulling of chariot being held next day, so the old tradition still remains in force the Rath Yatra gets its act a day late, inform villagers.