Kalinga War a Misnomer with Geographical Location of Kalinga. 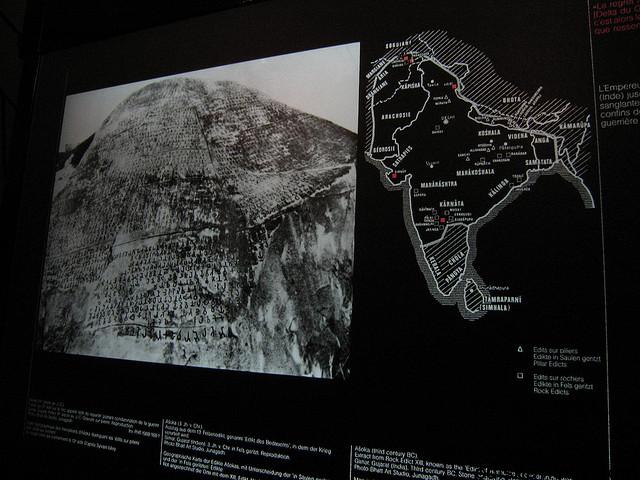 If we talk about 2200 year back references about Kalinga war and put Dhauli rather say injected to Dahuli as a war place without having any proof to it is a disastrous one. If you go to the navigation theory it is sound pure false that Colombus and Marcho polo of European origin discover the world through voyage. It is clearly seen from the Mahameghavahana Inscription that not only voyage but Naval War Fare already existed in Kalinga, then what to talk about voyage?
Here I want to say after Java, Sumatra, Lanka, Bali, Indonesia etc. of South East Asia then Kalingan Voyage adventurous and next to American sub continent ,and in Phillipines Aggressive marketing of Kalinga name may be due to competition of trade with southern India in Bali, Java, Sri Lanka etc. Here in Phillipines only Kalinga Marketed with name and fame.

When Kalinga going to South East Asia and American Sub continent then it is almost sure that they also in northern India. In Greek Mythology we also find Kalingan presence. In Apollonius of Rhodes’ “Argonautika”, Datis, a chieftain, leader of the Gangridae [Kalinga] was in the army of Perses iii fought against Aeetes during the Colchian Civil war. Colchis was situated in Modern day Georgia, on the east of the Black Sea. Virgil also speaks of the Gangardae[Kalinga] in his Georgics.
There are also different place name similar to that in Kalinga in the northern border of India where Alexander also not to dare to cross sword with Gangridae [kalinga]. You may see Katak, puri , Konark in the Northern border of India and surprisingly the XIII Rock Edict which is shouting of Kalinga war is not in modern Odisha or in Modern India.

[quote]Therefore if there is a war in Phillipines in Kalingan province , then that should not be referred to Kalinga war in Dhauli or in modern Odisha. Here in the picture there is also a Vangala just like in Modern Odisha neighborhood there is also Bengal[West Bengal]. Peoples here to migrated to the north and settle there is a simple phenomena and in that area the struggle is having its own Geographical problem. No doubt they are related to their ancient place but the politics is different due to geographical location.[/quote]

XIII Rock Edict of Devanampiya neither give his name as Asoka nor clarify the war in any way. Minimum requirement for a war inscription is regarding opposition leader name and the reason of the war, which is purely missing in the XIIIth Edict . The place of the Edict is also very suspicious for writing about the war which is Shabaz Garhi in Modern Pakistan. Shahbaz Garhi is located 13 km east of Mardan(Pakistan) on the road to Swabi. Sown a dirt track to the right, a few meters, are the Ashokan inscriptions, carved in two rocks on a hill about 300 meters to the left. The Ashokan inscriptions date from the 3rd century BC and are the oldest surviving writings of any historical significance in the Subcontinent. At Shahbaz Garhi 12 edicts are carved on the rock, two on another, Shahbaz Garhi is important to Buddhists because f its association with prince Sudana, or Buddha in one of his previous incarnations, Sudana means of noble charity; the area is still popularly know as the Sudana Plan.
In this context telling about Kalinga War and it related to Dhauli is looking forgery of the Britisher, who are very zealous about the Kalingan presence in the world scenario through advance voyage quality. Reading of the Edict first started by the Britisher. The original script was in Brahmi and in Pali language and when it was translated to Sanskrit and again translated to English the forgery injected which lead to misleading of the clear tone of the edict. When you make a draft of anything , it must be correlated to the subject not collection of word made a perfect draft. If XIII Rock Edict refers to Kalinga war then it should be the main part of tone of the Edict not only a single word and a single time justified any proper draft. Kharavela in his Edict clearly showing the Geographical route towards North India campaign. AgainKing Darius of Persia who is the Champion of writing his Edict also follow the same rule of law, but Devanampiya inscription missing the trend and only eulogize application of religion in Politics but not eulogize Buddha. In this context it is true to read the tone of the edict on religion based politics not on a war basis which also not supported by Buddhist literally chronicle Mahayana about any type of war with Kalinga.

[quote]Right of the top corner is the place of XIII Edict of Devanampiya.
The Great Scholar Dr. K.R.Norman in his concluding remarks, said:- “ The Kings original orders were, therefore, inscribed as they had been misread, miscopied and misinterpreted to a great or less extent, by the various members of the secretariat. It must be our aim to remove the faults which have crept on, and try to find out exactly what Asoka said.”
Current study by Prof. Meena Talim remark thus:- “I may point out here that such flaws were not only committed by the members of the secretariat of the King Asoka but many a time, the words of Asoka were not correctly interpreted by scholar community. ”
Due to British forgery and then copy to copy and copy to copy with adding new drama from the mind the original tone of the edict purely diluted and fixed to Dhauli, Karubaki , Grand old Woman and such fabricated story to it as a masala film.
Recently when Dr.Meena Talim who is the first person to be awarded a Ph.D in Pali found no such word like Kalinga Vaja (Kalinga Vijaya) and vadhe (Badha) in XIII Rock Edict then she translated the edict in Pali and Hindi. When I go through this I found the grammar is to be read like thus:-[/quote]

At last single reference of Kalinga is not sufficient about a great war of so called devastation, it is purely a misnomer and it is a political injection by Colonial writer for their colonial thinking.///Reference-‘Edicts of Asoka’ by Meena Talim, ‘ Asoka and the Decline of Mayuryas ‘ by Romila Thaper, Meghasthenis Indica and Ancient India as Described in Classical Literature, John W.McCrindle,p.201