Addressing the occasion chief guest minister Mr Amat reiterated the history of Odisha and its formation in the year 1936 a first state of the country established on linguistic basis. Minister also highlighted the contribution of Jagatsinghpur district’s freedom fighters during pre independence period. The soil of Jagatsinghpur delivers fragrance of Art, culture, music, literature and in politics its son late Odisha chief minister Nabakrushna Choudhury an ideal politician of the country. 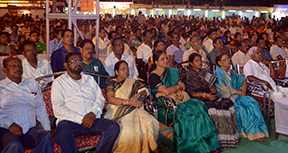