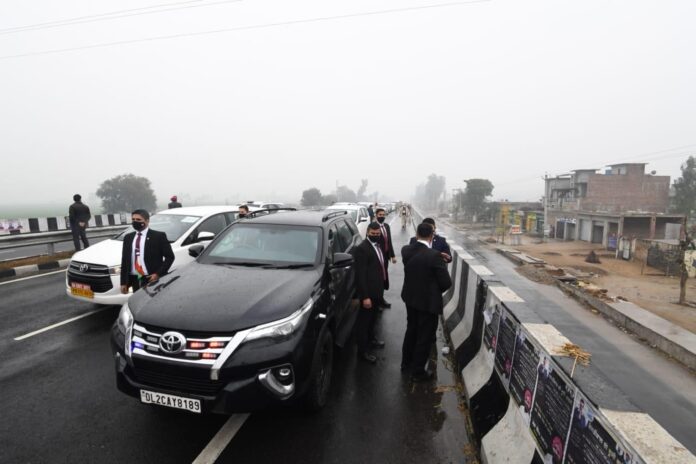 Massive security arrangements have been for Prime Minister Narendra Modi’s visit to Hyderabad on Saturday after the recent security breach in Punjab.

At least 7,000 police personnel, including Central teams, will be deployed as part of the security for the Prime Minister’s half-day visit to attend two programs, both on the outskirts of the city.

Director-General of Police M. Mahender Reddy along with other top officials is himself ensuring fool-proof arrangements at the Rajiv Gandhi International Airport (RGAI) and at both the venues.

Police personnel are being deployed along the road routes to both venues although Modi is scheduled to fly in a chopper.

After landing at RGAI at Shamshabad on the city outskirts, the Prime Minister will be flying to Patancheru in the neighbouring Sangareddy district to visit the International Crops Research Institute for the Semi-Arid Tropics (ICRISAT) campus at Patancheru near Hyderabad.

After inaugurating the 50th-anniversary celebrations of ICRISAT, Modi will fly back to the airport and then leave by road for Muchintal in Rangareddy district near the airport to unveil the ‘Statue of Equality’ at Ramanujacharya Asharam. He will then fly back to RGIA to return to Delhi.

Both the venues have already been taken over by Modi’s security personnel. The officials from the Prime Minister Office (PMO) have worked out route maps and other security details in coordination with the state police.

The security officials conducted a trial run of choppers and vehicle convoys from the airport to both the venues.

Telangana Chief Secretary Somesh Kumar and DGP on Friday reviewed the arrangements for the visit. For the second day in a row, the top officials held a meeting with officials of various departments to take stock of the arrangements made.

The Chief Secretary directed the officials of concerned departments to work in coordination to make the arrangements in the most perfect way.

The Medical and Health Department has also been asked to position specialist medical teams along with equipment at the venues.

Officials of the Roads and Buildings Department were asked to undertake road repair works and provide sufficient lighting arrangements on the used by Modi’s convoy. He directed Energy Department officials to ensure uninterrupted power supply at all the places of VIP visit.