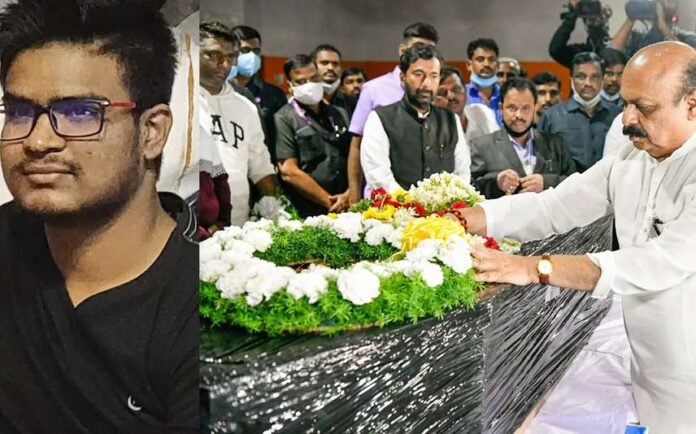 The mortal remains of Naveen Shekarappa Gyanagoudar, the Karnataka student who was killed during shelling in Ukraine’s Kharkiv city on March 1, reached the Kempegowda International Airport (KIAL) in Bengaluru in the wee hours of Monday.

Chief Minister Bommai spoke to reporters later and stated that a country’s strength and might is known at the time of crisis. Prime Minister Narendra Modi “showed the might of the nation at this hour of crisis by bringing back the mortal remains of Naveen”.

“The body has arrived today and we have made all arrangements,” he added.

A dedicated helpline was initiated within 12 hours of the crisis, he said. State officials were in constant touch with External Affairs Ministry as well as the Indian Embassy in Ukraine.

“I am in pain that we could not bring back Naveen alive,” the Chief Minister said.

“Our government stands with Naveen’s family. We have issued the compensation, and we will see what can be done for his younger brother,” he stated.

Naveen of Karnataka’s Haveri district had lost his life on March 1 in Kharkiv. His family has been “beseeching” the authorities to retrieve his body, but heavy fighting in the area had prevented the retrieval till now.

The family has said that Naveen’s body would be donated to a medical college after last rites.