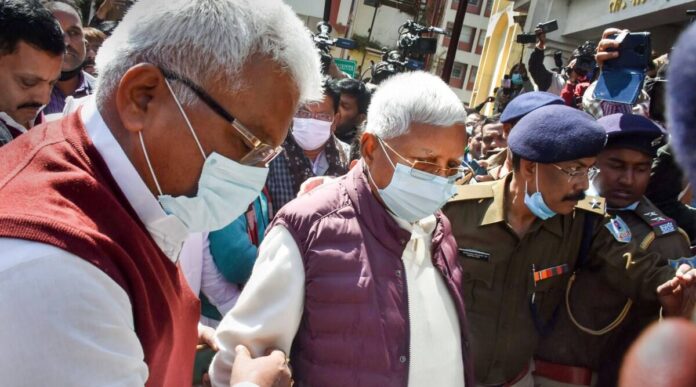 A special CBI court in Ranchi has sentenced Rashtriya Janata Dal (RJD) chief, Lalu Prasad Yadav, to five years imprisonment and imposed a fine of Rs 60 lakh on him in the Rs 139.35 crore Doranda treasury scam, the fifth fodder scam case, on Monday.

The former CM of Bihar, along with other accused, was pronounced guilty by the court on February 15.

Lalu, 75, appeared virtually in court as he is in judicial custody and is admitted to the Rajendra Institute of Medical Sciences (RIMS) for health issues.

Apart from Lalu Prasad, the court had also convicted former MP Jagadish Sharma, Public Accounts Committee president Dhruv Bhagat and 72 others in the case. 24 were acquitted for want of evidence.

In the scam, crores of rupees were illegally withdrawn in the name of transporting animals and arranging fodder for them in Bihar’s animal husbandry department. The animals included bull, buffalo, cow, goat, and sheep. The documents regarding the transportation of animals were found to be fake and the vehicle numbers in the documents were found to be scooters, mopeds, and motorcycles.

The cases occurred during 1990-1996. The Bihar CAG had sent the information about the graft to the government time and again, but the government did not pay heed to it.