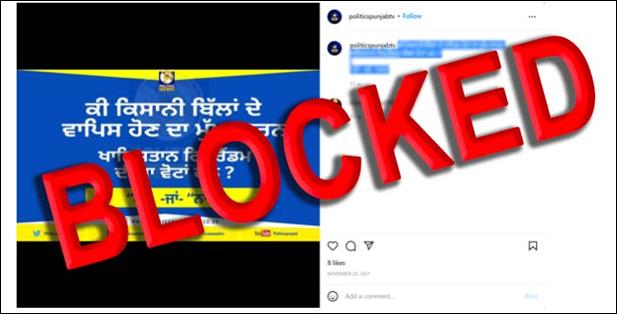 The Ministry of Information and Broadcasting has ordered the blocking of apps, websites, and social media accounts linked to the banned organization Sikhs For Justice (SJF) on Tuesday.

The Ministry also said that it has ordered the blocking of apps, websites, and social media accounts of foreign-based ‘Punjab Politics TV’ having close links with the SJF, deemed unlawful under the Unlawful Activities (Prevention) Act, 1967.

“Relying on intelligence inputs that the channel was attempting to use online media to disturb public order during the ongoing State Assembly Elections, the Ministry used emergency powers under the IT Rules on February 18 to block the digital media resources of Punjab Politics TV,” it said.

The Ministry said that the contents of the blocked apps, website and social media accounts had the potential to incite communal disharmony and separatism; and were found to be detrimental to the sovereignty and integrity of India, security of the state, and public order.

“It was also observed that the launch of new apps and social media accounts was timed to gain traction during the ongoing elections. The Government of India remains vigilant and committed to secure the overall information environment in India and thwart any actions having the potential to undermine India’s sovereignty and integrity,” it added.

Previously, the Ministry had ordered the blocking of 35 YouTube-based news channels and two websites in January that were involved in spreading fake news against India in a coordinated manner over digital media.

The Centre had also blocked 20 YouTube channels and two websites in December last year when the emergency powers under the IT Rules, 2021 were first utilized.