15 Arrested in Violence Over Hijab Row in Karnataka 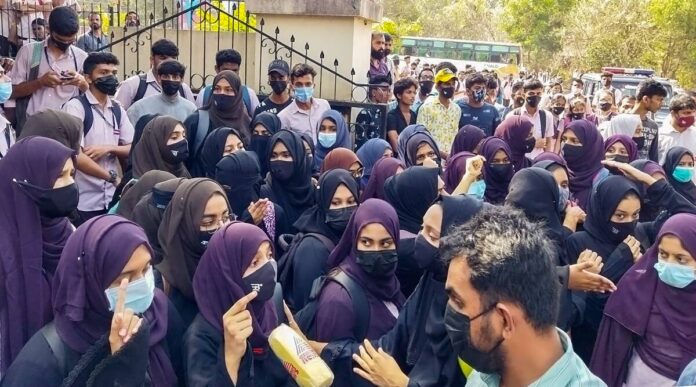 Amid the row over the wearing of hijab by students, tense situation continued in Karnataka. The police have arrested 15 persons so far in violent incidents related to the issue.

NSUI members on Wednesday morning entered First Grade Degree College and PG Research Centre ignoring the curfew imposed in the Shivamogga district. They pulled down the ‘Bhagva Dhwaj’ or saffron flag and hoisted the Tricolour there on Wednesday morning. The police dispersed the crowd and managed to secure both the flags.

Authorities clarified that the ‘Bhagva Dhwaj’ was hoisted on the empty flag post in Shivamogga college on Tuesday. They have denied that Bhagva Dhwaj was hoisted after taking down Tricolour.

Some Hindu organisations have given a call for bandh in the Banahatti town in Bagalkot district to condemn the violence.

The police has arrested 15 persons so far in connection with the violence that broke out on Tuesday and sent them to judicial custody in Shivamogga and Bagalkot districts, according to sources.

The High Court is expected to give the ruling on wearing of hijab by evening.

Chief Minister Basavaraj Bommai will take suggestions from senior cabinet colleagues in a meeting today on handling the situation in the state. He discussed the developments in the High Court this morning with Advocate General Prabhuling Navada and other officials.

Education Minister B.C. Nagesh said that action will be initiated against people who are behind raking up the hijab row in the state.

Harihara police have lodged four cases regarding the violence on the hijab row. Hindu organisations have called for a bandh and a march from Vaibhav Theater to the Tehsildar office condemning the attack on teacher Manjunath Naik, who was attacked with iron rods. His condition is said to be serious.