Incredible precedent – Hindus and Muslims come together during Dola festival. 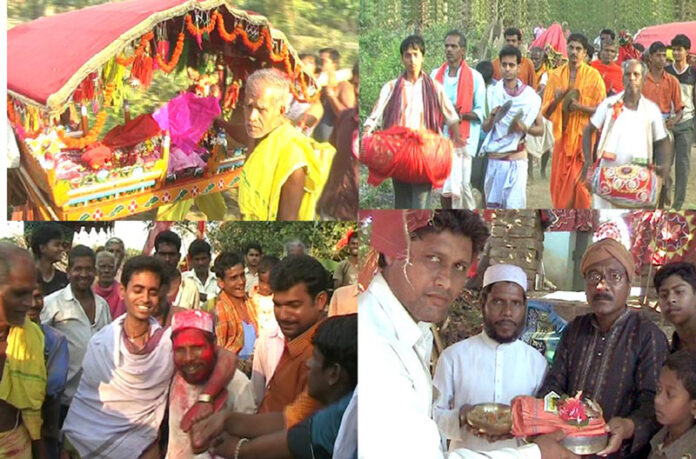 Jagatsinghpur Mar 26. Although there is news communal disharmony in Ayodhya, Mathura , Hyderabad and Banaras between Hindu and Muslim, when both the religious communities are struggling since years over sacred space, but elsewhere thereis space sacred to two or more religions.

It was a perfect picture of religious harmony on Dola festival [Hindus festival of color]hundreds of Muslim devotees of Phalirtakia village under Jagatsinghpur district have been celebrating Dola for past 300 years along with the Hindus of the locality with traditional enthusiasm and fervor and performing it without halt still date , Muslims have no qualms about celebrating Hindu festival.

Several Burqua clad women and men wearing namaz-ki-topi [SkullCap] with children in tow are waited huge numbers to offer prayers to the Hindu deity ‘Gateswar’ who visits Muslim Dargha named as Satya Pira Pitha during Dola festival, they believe that observing Dola festival is an age old custom and tradition that reflects communal harmony of the locality, while scores of Muslims from near by villages are flocked to witness this one day occasion observes every year. 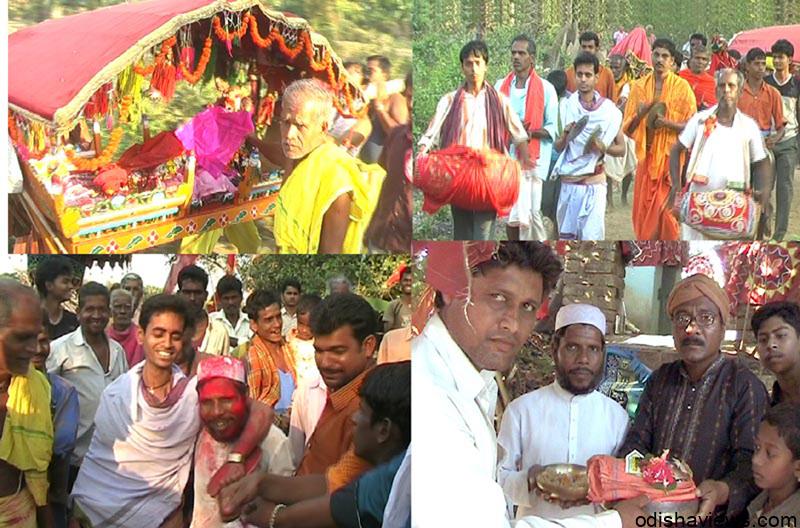 A Chadar is being offered to the Satya Pira by Hindus whereas the Muslims offer Dhoti and napkin to the visiting deity then both the communities smear Abhira each others then completing these hereditary rituals atSatya Pira Pitha Hindu God move for annual journey Bhoga Khia in surrounding villages.

Haji Saukat Ali, a retired school head master of Phakirtakiavillage says that his family has been observing Dola at Satyapira Pitha asgenetic practice, whether it is Allah or Hindu God there is only one supremepower, we strongly believe that peace and prosperity will prevail including communal harmony among both communities by observing Hindu feisty Dola, hepoints out.

sayad Sultan Ali from Satya Pira pitha informs that the Sayeedfamily of Phakirtakia village has a long history observing Dola, legend saysthat the 16the century Budden Saheb a Muslim prophet had visited the villageand lived there till his death, after he breathed his graveyard was named asSatya Pira Pitha that exists today. Buden Saheb during his alive period wasstarted the precedent of observance of Dola festival at Pitha , that timeduring Dola festival Hindu Gods were visited Pitha , Saheb was offering themBhoga, Abhira to visiting god and in exchange was receiving the same from Hindu counterparts after his demise the Sayed Families of locality has shouldered theresponsibility and performing Dola festival at Pitha as traditional manner,Bukshy informs.

Sk Muktar a Muslim youth says that itis not only speaking communal harmony and shows amity between Hindu and Muslim communities so also exhibiting relationship between Hindu God and Muslim prophetin old times, he adds.