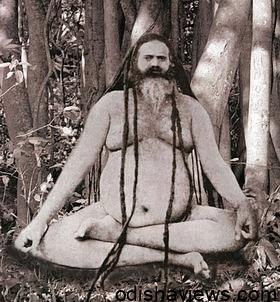 Totapuri was born in somewhere in the erstwhile Mughal india, in some border village of North west frontier province and erstwhile punjab.Now the village comes under Pakistan. It May be a place named Hinglaj in Baluchistan province of Pakistan.At Baba Ladan of Hingalaj there is is a moth-(Monastery) of Baba Rajpuri of 17th.century & now the Mahant of the Monastery claim that the place was the birth place of Totapuri Maharaj .The gurus in succession are the disciples of the famous Naga Monk Totapuri Jee. The First Mahant of Moth Baba Rajpuriji was the disciple of Maharaj TOTA-PURI.The parantage & exact Swanakshetra day & the Sambachhar( year of birth) of Totapurijee is not known nor recorded any where.However it is claimed Totapurijee was a Balabrahmachary left home in his tender age & initiated in to Sanyas in Naga cult.  It is also not known who was the Guru initiating Totapuri Ji into Sanyas in 17th.century.In later part of 17th.century Totapuri Jee was made Head of a Naga Monastery in erstwhile undivided Punjab for a couple of decades and there after he deserted Moth and set out for Brajan(move place to place)& never returned to the base.As a Paribrajak sanyasi He travelled a lot unheard of in any other case.

Towards his last part of his Yogic life for about 40 years He put a stop to his nomardic/Brajan & settled at Srikhetra Puri in an isolated sand dune called Girnari bant.Later an Ashram was established there viz.Adwait Brahma Ashram.He entered into Mahasamadhi on28th.Aug.1961 AD.in the Ashram itself in his Samadhi yog in the fateful day ie,13th.day of full moon of Sravan in early morning. He is neither Ishwarpuri nor Anandapuri as claimed by some & the life time 1780 AD    to 1866     AD as projected by some is utterly wrong & malicious,a crime in itself.To the extent some people also project a samadhi in a naga monastery in Haryana fixing it with Totapuri Jee.Interastingly,this great saint was a rare specimen of Monk having no particular name: was called in various names in deferent locations in diferent times.He is known as Naga Baba,Nanga Baba,Languli Baba, Lengta baba,Kankaria Baba, Mauni Baba ,Tota puri & lastly Digambara Paramahans or Languli Baba at Puri.Interastingly again the Photo presented bySanyasis of Hinglaj-Babaladan in Baluchistan,Anandapuri math ,Baba Rajpuri math of kaithal and also of Rama Krishna Mission are one and the same that we are having at ADWAIT BRAHMA ASHRAM,Girnarabant Puri .

There is no dispute about the Photo that is associated with Totapuri Maharaj as is being projected.But I vehemently defer & oppose about the age told and so called Samadhi marked as of Totapuri Jee at Naga math in Haryana. In that case that may be the samadhi of any other Naga sanyasi of the same name or even Ishwarpuri.In that case revered Ishwarpuri can not be the Totapuri we discuss nor the photograph projected.Photography came in the last decade of 19th.century or 1st.decade of 20th.century.We the Ashramites of Adwait Brahma Ashram Puri Know Totapuri Jee as Sri Sri  Yogeswar Brahmavid-Baristha Digambar Paramahans Dev or simply Digambar Baba.