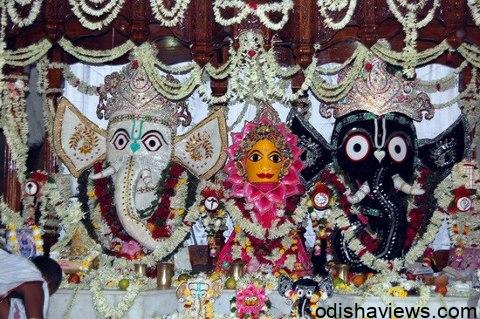 Traditionally Ganapati conceives the great Remover of Obstacles and he is the son of Lord Siva. Lord Ganesha represents OM or the Pranava. Pranava is the chief Mantra of the Hindus. Nothing can be done without uttering it. The famous debate between the two brother Ganesha and kartikeya and at last Parents are the best God is a beautiful epic with beautiful knowledge.

The story of the birth of this elephant deity, as depicted in the Shiva Purana, goes like this: Once wife of Lord Shiva ,goddess Parvati, while bathing, created a boy out of the dirt of her body and assigned him the task of guarding the entrance to her bathroom. When Lord Shiva, returned, he was surprised to find a stranger denying him access for entry , and struck off the boy’s head in rage. Parvati broke down in utter grief and to soothe her. Seeing the situation Lord Shiva sent out his squad (gana) to fetch the head of any being who was facing the north while sleeping. The squad found a sleeping elephant and brought back its severed head, which was then attached to the body of the boy. Shiva restored its life and made him the leader (pati) of his troops. Hence his name ‘Ganapati’. Shiva also bestowed a boon that people would worship him and invoke his name before undertaking any venture or praising any deity.

The philosophy of the deities is accessible to the educated and intellectual class, and conveys psychological ideas or concepts meant to be contemplated or meditated upon to reveal the nature of the mind, mind-body complex, or beyond mind-body construct.

In yoga philosophy, Lord Ganesh is the ruler of the muladhara chakra at the base the cerebrospinal axis, and is the remover of obstacles in life and the spiritual path. This muladhara chakra governs time, matter and memory. To validate or appreciate this idea beyond blind acceptance as a (bizarre or unusual) religious belief requires submission to a specialized and specific discipline of internal investigation, usually through meditation.
He is the Presiding Deity of the Muladhara Chakra and his Vahana is the small mouse. Elephant is also the symbol of India . Each and every Invader to India referring to the big Elephant of Kalinga[India] is always the greatest threat to the invaders.

Power of India always resides in the power of Elephant . Lord Ganesh popularly referred to as the Elephant god. Kalinga representing India to the world and there is a story behind Lord Jagannath’s Ganesh Vesha. According to a legend, a Ganesh devotee from western India state of Maharashtra , who visited the temple, wanted to see the god as Ganesha. First his wish was not complied with, but later the principal service man (seveyat ) of the temple dreamt that the Lord Jagannath has expressed the desire to be decorated in Ganesha Vesha. The Ganesha Vesha s said to have been taking place since then, and the devotees of Ganesha have become Lord Jagannath’s ardent followers. From then on the day of Jyestha Purnima, the Puri Triad has a ritual and adornment known as the Ganesha Vesha(also as Hati Vesha). The Vesha performed in a stone platform which is about 200 feet away from the temple sanctum. More than a 100 pots of water are poured over their heads and after then the ritualistic Ganesha Vesha takes place. Big Brother is dressed like a White Elephant (Dhala Hatti) and Lord Jagannath is dressed like a Black Elephant (Kalia Hatti).

Referring to our mythology renowned Ganesha Vrata was effectively celebrated by the Devas to obtain Ambrosia on the eve of churning the ocean, by Lord Rama to get back Sita, by Indra to defeat Vritra Asura, by Bhagiratha to get down the celestial Ganges, by Damayanti to find her lost husband, by Draupadi and by Samba to get cured of incurable disease. The god is a rescuer and savior of mankind and remover of obstacles.
[quote]In last word Ohh God –“ Vakratunda Mahakaya Suryakoti Samaprabha”. Hey Jagannath Ganesha Rupare Samastanka Dukha Nibarana Kara.[/quote]