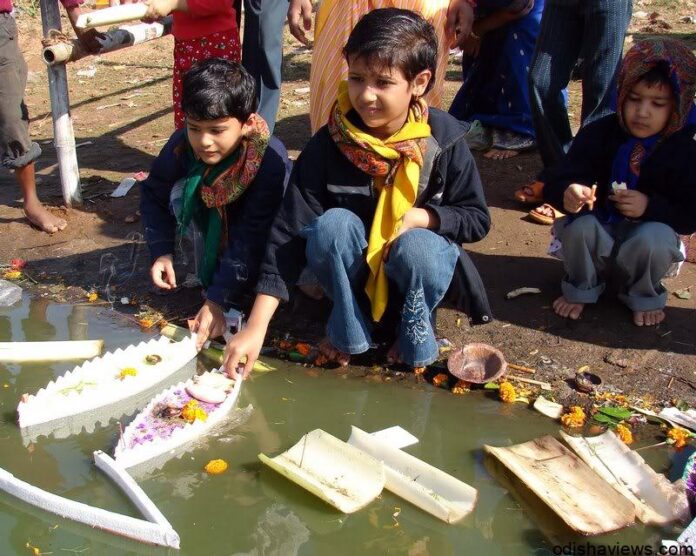 ‘Danga Bhasa’ in Odisha is Called ‘Loy Krathong’ in Thailand

[dropcap]T[/dropcap]he Pious lunar month of ‘Kartik’ is always celebrated as festive month all over India. India is a multi religious country. and even if the religion change the celebration point is one. ‘Holi’ celebrated by Hndus in the same way Sikhs celebrated ‘Hola Mohhala”. Hindus have several significant events associated with Diwali, in the same way sikh’s celebrate diwali as for marks the chhorh Divis this was when the sixth guru , Guru Hargobind ji relaesed 52 hindi kings out of prison. In Jainism, Deepawali has an added significance to the great event of Lord Mahavira attaining the eternal bliss of nirvana. Therefore the reason of celebration may change with significance but the point of celebration remain one, that is togetherness, brotherhood and festivity. 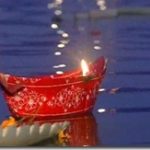 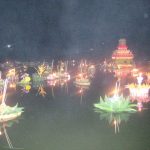 The word “Loy” literally means “to float” and “Krathong” means a raft. The raft is said to be about a small floating offering about 20 centimeters in diameter and is traditionally made from a section of a banana tree trunk. The raft is decorated with flowers, a candle and an incense stick. If we connect it to Odia linguistic term “Krathong” may be referred as “Kartika+ Danga=Krathong”. Loy Krathong means “Kartika Masa Danga Bhasa”.

Ramayana in Bali to Loy Krathong Festival in Thailand

Voyage and Knowledge go side by side to other South Asian country in such a way that even after Indonesian people change their religion from Hinduism to Buddhism and then to Islam, still Ramayana played a great role in their rich cultural heritage. Garuda, the vehicle (vahana) of Lord Vishnu appears in many temples of ancient Indonesia is also the Symbol of Indonesian National Flag. All these heritage are developed by Kalingan through their ancient art, knowledge and voyage.

“Loy Krathong” is a Thai traditional event and taken place on the night of full moon in the middle of November (12th month of Thai lunar calendar) every year. Krathong which are an offering – traditionally made out of a banana stalk( Kadali Patuka) and adorned with candles, incense and some money – are floated down the rivers. How the “Loy Krathong” festival began remains unclear, but various accounts point to an Indian origin. The closest parallel is with Deepavalee, a festival of lights also held in November, in which Hindu devotees float tiny lanterns to honour the gods Brahma, Shiva and Vishnu. Scholars recently have found out that it was and invention during the Bangkok period. Writings of H.M King IV in 1863 stated that the original Brahmanical festival was adopted by Thailand Buddhists as part of their ceremony to honor the original Buddha, Siddhartha Gautama. Aside from adorning the Buddha with light as represented by the candle on the raft, the floating represents the letting go of all grudges, anger and other forms of negative feelings.

It is believed that Loy Krathong is an ancient Brahmanic or Indic (Kalingan) festival. This festival shipped through Kalingan voyage. Originally it was a ceremony where people paid their respects to three different gods known as Phra I-Suan (Shiva), Phra Narai (Vishnu) and Phra Phrom (Brahma). People would make lanterns using candles and paper, which would then be displayed in the homes of royalty, rich people or high-ranking officials. One hundred and fifty years ago, at the urging of King Mongkut (Rama IV), it was later adopted by Buddhists as a ceremony to honor the Buddha. 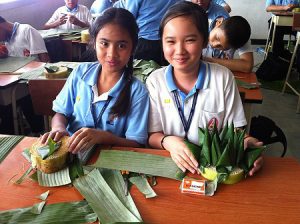 An explanation is that it is a way to pay respect to one’s ancestors just like ‘Bada Badua Ho….” in Odisha It is also possible that this is derived from a Hindu festival that pays tribute to the god Vishnu, who meditates at the center of the ocean. Therefore the origin of the festival remains still obscure and is varied by region.

The Central part of Thailand celebration is derived from a royal Brahmin rite. They only changed it to Buddhism during the reign of King Mongut. In Northern Thailand it has been always about Buddha’s stories, especially as it is the time for the Lanna people to listen to the Vessantara Jataka sermon.

According to legend Noppomas was a consort of the King of Sukothai in the fourteenth century. She was the daughter of a Brahmin priest at the King’s court. She made the first Krathong out of banana leaves in the shape of a lotus flower and presented it to the King. He lit the candle and the incense stick and floated it on the water, so starting the tradition we know today. In fact, the floating of Krathongs (Loy Krathong means floating krathong) began as a Sukothai tradtion, but was later grafted onto these festival celebrations all over Thailand.

The whole month of ‘Kartika’ is considered to be the most sacred among all the twelve months of the year and Hindus refrain from eating non- vegetarian food. The last five day of ‘Kartika’ are considered more sacred and called ‘Panchaka’, the last day being the “Kartika Purnima”. For all the five days the women after purificatory bath in the early morning draw beautiful flower-designs around the ‘chaura’ (a small temple like construction with a ‘Tulsi’ plant overhead) with colour powders (Jhoti, Muruja) produced indigenously. Every day they take food only once in the afternoon which is known as ‘Habisha’.

The devotees offering prayers to Lord Shiva who is said to have killed the demon ‘Tripurasura’ on this day. Group singing of ‘kirtans’ and loud thrashing of ‘Mrudanga’ and cymbals continue for the whole day. Huge images of “Kartikeswar” are built and worshipped. In the city of Cuttack a grand fair known as “Bali Yatra” is held for about three-four days to celebrate ancient voyage specialty of Sadhabas for sailing off to Bali (Indonesia).

In ancient past Orissa (then known as Kalinga) was a major sea faring nation. Kalinga had regular contacts with South and South East Asia where in merchants from Kalinga (then called Sadhavas) used to trade spices and other local products with those countries. In modern days also there are lots of Provinces in South East Asia also named as Kalinga. The sailors used to set sail in the Asadha month (of Oriya calendar, rainy season) and come back by the Baisakha month (summer season). That’s why a ritual song also simultaneously murmuring as Aaa (Aasadha ), Kaa (Kartika), Maa(Maargasira) , Bai (Baisakha) ….with the boating festival when the hand made boat float .Women from the families of the traveling sailors used to perform rituals for the safe journey of the boats, which was called as Boita Bandana (Worship of the Boats). Tales of ‘Taapoi’ are also recited.

Festival, Festivity and celebration with tradition of voyage ,always gives us proud for the culture of knowledge and voyage.