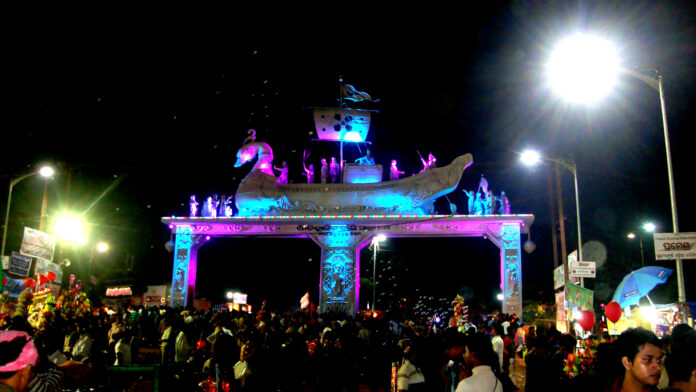 Bali Yatra, a festival that commemorates the rich maritime history of Odisha is celebrated throughout the state. In the historic city of Cuttack, a week-long event is organized starting from the day of Kartika Purnima (full moon day in the month of Kartik i.e October-November).

On Kartika Purnima, people of Odisha gather near banks of Mahanadi, Brahmani river, other river banks, ponds, water tanks, and seashores to float miniature toy boats, made of colored paper, dried banana tree barks, and cork, as a symbolic gesture of their ancestors’ voyage. These toy boats, usually launched early in the morning contain traditional paan and small oil lamps, which are lit and placed inside them, to provide an attractive sight during the festival. People sing the song Aa ka ma boi, pan gua thoi… to remember the early maritime history of Odisha. The song tells about four months that are important for marine merchants of Kalinga (the earlier name of Odisha). This festival is also celebrated with great fanfare in Paradeep. Bali Jatra bears testimony to the rich maritime legacy of ancient Odisha. This is the specific time that was considered auspicious by the Sadhabas to begin their voyage in vessels called Boitas. The voyage is begun on Kartika Purnima to take advantage of the favorable wind blowing during this time. Ajhala or big fabric sails were used to harness the wind power to move the Boitas.

This Baliyatra is not only famous in Odisha but also all over the world. It also said that you will be find everything here for purchase except family members. This fair is full of art and craft. We find the handwork all the state of India in this fair.