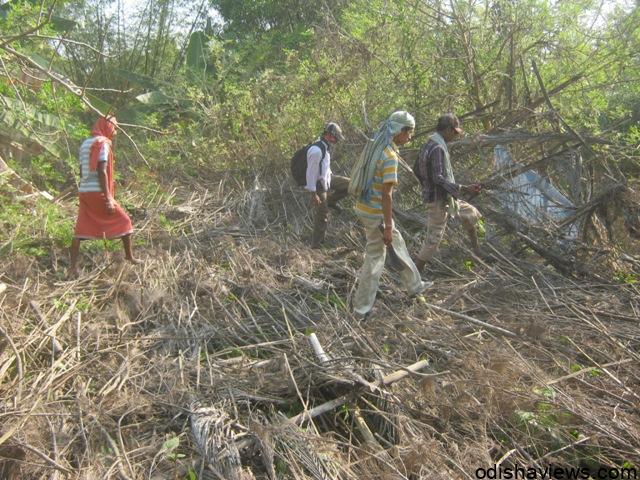 JAGATSINGHPUR M ar 05. The land acquisition for Posco’s planned steel mill continued at Gobindpur in Odisha’s Jagatsinghpur district for the third day on Tuesday, as many as 11 betel vineyards were demolished and a tune of Rs 14.38 Lakh compensation was paid to the land givers.

Meanwhile the three anti Posco people who had killed during bombs explosion on Saturday were cremated at Patana Hat violating administration imposed yesterday’s prohibitory order section 144 Crpc where the project opponents led by leaders five political parties held a protest meeting and lauded the agitation would continue and threatened that the local villagers might die but won’t allow Posco.

Government officials stopped the process after paying the farmers compensation for 11 betel vineyards destroyed on Tuesday afternoon, twelve platoons of armed policemen were deployed to guard the site and seal the entry points to the area but maintained utmost restraint after knowing the anti people were carrying three deceased bodies for conducting cremation at Patana Hat and holding a protest meeting.

“The acquisition work was carried out peacefully, and the process will continue on Wednesday Collector S. K. Mallick said however he maintained administration proceeded slow and did not confront with the anti project people when they pushed towards Patana Hat violating the prohibitory order and cremated trio bomb blast deceased there and held a protest meeting, moreover, he was happy that officials held discussions with few Govindapur residents those had inclined giving betel veins for tomorrow’s land acquisition, he informed.

Meanwhile, leaders of the Congress, the Communist Party of India, the Communist Party of India (Marxist), the Forward Bloc, the Samajwadi Party, and the Rashtriya Janata Dal joined in the cremation of three deceased and spoke on the protest meeting organized on the outskirts of Patana Hat defying prohibitory order.
Posco Pratirodha Sangram Samiti leader Abhya Sahoo presided the protest meeting and said the Saturday’s bomb attack had targeted the house where he stays ordinarily and it is the handiwork planned by the pro project people with support of district administration sadly he escaped from the attack but three anti Posco fighters succumbed in the incident and demanded to start a impartial prove over the incident.