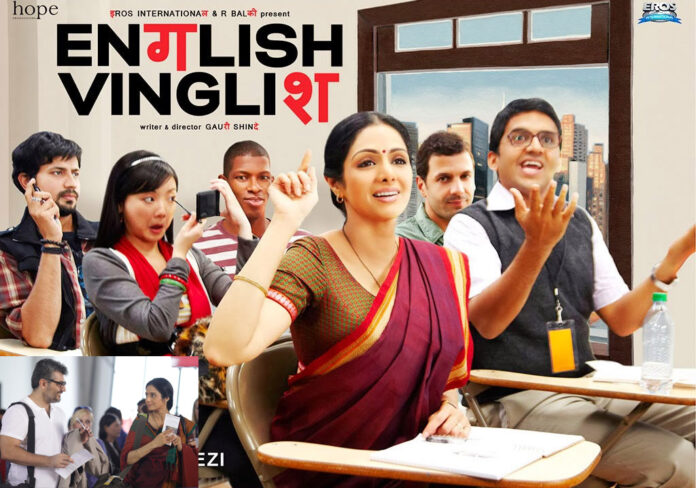 Director Gauri Shinde’s debut Hindi movie English vinglish, is a story of a housewife and her quest to learn English.By The movie Sridevi comeback to B-town. Her performance has impressed the critics. The film has been rated 4 out of 5. It’s amusing, emotional, heartrending, and also insightful. It is an inspiring film with a message. It must-watch for every parent, every child. Strongly recommended!

English Vinglish is a must-watch movie. It’s a competitive family entertainer. It has some excellent performances, especially Sridevi’s! compared to Madhuri Dixit (Aaja Nachle) and Karisma Kapoor’s comeback (Dangerous Ishhq), Sridevi definitely has the best comeback in Bollywood with a beautiful story and strong role. One of the best movies of the year English Vinglish deserves a Hats Off!

This movie is a lesson for married couples, children, families, and even friends. Shinde has layered a love story with very beautiful, tragic twists and romance. The characters are delicately displayed; each one playing his or her role. Both Adil Hussain and Mehdi Nebbouare solid. Priya Anand is the nice turn in a strong performance. But it is Sridevi who is obviously the soul of English Vinglish. Such a method in direction is seen after a long time on screen.

The premiere show of English Vinglish had got a standing ovation at the Toronto Film
Festival and the film deserve every bit of it. Gauri Shinde’s debut as a director is sure-footed and confident, and Sridevi is back as if she had never been gone.English Vinglish is a unique Hindi film that creates a heroine out of a homemaker.