Home History ELEPHANT AND CHAKRA UNDER THE FEET OF A LION IS A SALUTATION...
HistoryOdisha Tourism 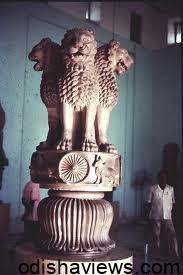 [dropcap]I[/dropcap]n Indian custom and tradition it is numerology or belief, it is to say that number has its own significance. When we remember the Birth day of celebration of the God we always add number to that. It is Janmashtami(8), Durgshtami(8),Ram Navami(9), Ganesh Chaturthy(4) or Shri Panchmi(5) etc . all has it’s numerical value. Out of that, Krishna Janmastami number glorifies eight(8). If we connect number 8 to Lord Buddha , Jagannath or to Modern Konark structure then significance of 8 can be justified. When we think 24 spokes of Asoka representing Buddha then it is having no meaning of Buddhism and when it is under the feet of a Lion in so Called Asokan pillar then how it can be treated as glorification of Buddhism is a question mark. The Symbol of Buddhism is Elephant and Dharma Chakra under the feet of a Lion and the art is Persian then it what to India? It is a salutation to Invader or Buddha?

It is said that the Buddha was reluctant to accept images of himself, as he did not like to be venerated as a person. To symbolise the Buddha in the very early art, one used mainly the Eight Spoked Wheel. The Eight-Spoked DharmaWheel or ‘Dharmachakra’ (Sanskrit) symbolises the Buddha’s turning the Wheel of Truth or Law (dharma = truth/law, chakra = wheel). The wheel (on the left and right) refers to the story that shortly after the Buddha achieved enlightenment, Brahma came down from heaven and requested the Buddha to teach by offering him a Dharmachakra. The Buddha is known as the Wheel-Turner: he who sets a new cycle of teachings in motion and in consequence changes the course of destiny.

The Nila Chakra (Blue Wheel or Blue Discuss) has Eight Spokes  and it is the most revered iconic symbol in the Jagannath cult.The Nila Chakra is the only physical object whose markings are used as sacrament and considered sacred in Jagannath worship. It symbolizes protection by Shri Jagannath. It was  mounted on the top shikhar of the Jagannath Temple at Puri. The Nila Chakra is a disc with eight Navagunjaras (Oriya poet Sarala Dasa, narrates the legend of Navagunjara, in Mahabharata. Once, when Arjuna was doing penance on a hill, Krishna-Vishnu emerges him as Navagunjara. Navagunjara has the head of a rooster, and stands on three feet, those of an elephant, tiger and deer or horse, the fourth limb is a raised human arm carrying a lotus or a wheel. The beast has the neck of a peacock, the back or hump of a bull, the waist of a lion, and the tail is a serpent. Initially, Arjuna was terrified as well as mesmerized by the strange creature and raises his bow to shoot it. Finally, Arjuna realizes that Navagunjara is a manifestation of Vishnu and drops his weapons, bowing before Navagunjara- Navagunjara is a creature composed of nine different animals. The animal is considered a form of the Hindu god Vishnu, or of Krishna, who is considered an Avatar (incarnation) of Vishnu. It is considered a variant of the virat-rupa (Omnipresent or vast) which commonly used in  the Pata-Chitra style of painting, of Orissa.) carved on the outer circumference, with all facing towards the flagpost above. The Nila Chakra at Puri temple is made of alloy of eight metals (Asta-dhatu). 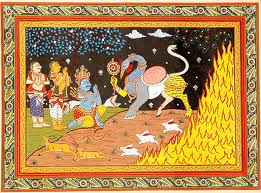 The temple also symbolizes the passage of time, which is under the sun god’s control. The seven horses, which pull the sun temple eastwards towards the dawn, represent the 7 days of the week. The 12 pairs of wheels represent the 12 months of the year and the eight spokes in each wheel symbolize the eight ideal stages of a woman’s day. Other sculptures decorating the temple’s exterior include deities, animals, floral patterns, voluptuous women, mythical beasts and aquatic monsters. The 24 giant wheels are beautifully carved and each of the eight spokes bears a medallion containing figurative carving. 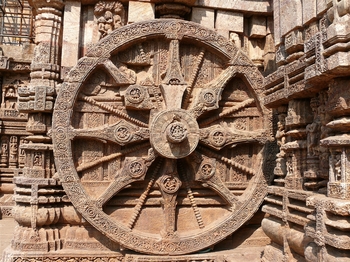 Other sculptures decorating the temple’s exterior include deities, animals, floral patterns, voluptuous women, mythical beasts and aquatic monsters. The 24 giant wheels are beautifully carved and each of the eight spokes bears a medallion containing figurative carving. There are 24 wheels fixed to the temple and is of 9 feet 9 inches in diameter and they are having 8 spokes. All stone wheels are full with engraved art works. Out of 24 wheels 6 are in either side of the main temple, 4 wheels are on each side of the Mukhasala and 2 wheels on each side of steps at eastern front. The 24 wheels signifies 24 hours of a day and the 8 spokes signifies prahars ( three hour period ) of a day.
Lastly to say, if it was eight spokes wheel then we can say the so called Asokan Pillar having Buddhism philosophy and reflected in symbol and also if it was extracted from any Buddhist famous temple then also it can also accepted as Buddhist philosophy. Why not ant symbol extracted from the Buddhist temple and why it was extracted from a Pillar which is having Persian art is questionable. It is a glorification of Invader or Bharata Varsa?